“Brett came up to the bar.
“’Hello, you chaps.’
‘Hello, Brett,’ I said. ‘Why aren’t you tight [drunk]?’
‘Never going to get tight any more. I say, give a chap a brandy and soda.’
She stood holding the glass and I saw Robert Cohn looking at her. He looked a great deal as his compatriot must have looked when he saw the promised land.” 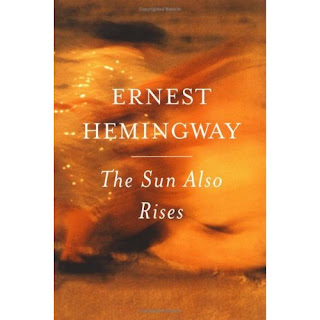 The Sun Also Rises is my first Hemingway novel. I love the descriptions of fishing in the mountains of Spain. I have a lot to learn from his stylized dialogue. But the novel dragged for me. Hemingway’s heavy drinking expats take 100 pages to make it to Spain, where they drink some more – waiting for the bull fights to begin. (BTW – Check out agent Michael Stearns’ blog post about negative book reviews.)
What fascinated me most was Hemingway’s portrait of Brett, Lady Ashley.
When she enters the novel in the scene above, we’re not sure if we’re meeting a man or a woman. Referring to herself as a “chap,” Brett is saying, “I’m just one of the guys.” Except…
Except almost every man in their circle falls for her.
There must be an archetype for characters like Brett. Think of Phineas in A Separate Peace. Their combination of intelligence, wit and physical attractiveness is irresistible to the other characters. They are careless of other people. The results, as in Hemingway’s novel, are destructive.
When I was student teaching, one of my ninth graders died in a car accident. Her father spoke to me at the wake. “Jaclyn was the center of our family,” he said. “Her mood set the tone for all of us.” At 14, this girl was the Sun around which her parents and siblings revolved. I thought that was off. I didn’t have kids yet.

Now I jokingly call my 12-year-old, “Sonny Delight.” Since he was an infant, his ups and downs have set the tenor of our family life. As a child with sensory integration issues, he feels things intensely -- and we feel along with him. Some days, the Sun rises and sets with this kid.
I wonder how to provide balance for a child like him. I’m not finding the answer in literature. Hemingway’s Brett says, “I’m not going to be one of those bitches.” But she burns up nearly everyone around her, the way my son sometimes does on his bad days.
No answers here. Just hoping adolescence brings more good days than bad. Hemingway would say, “Isn’t it pretty to think so?”
Posted by Author Amok at 1:28 PM

I think writing in a journal can help almost any adolescent...you can get all your feelings out where you can look at them, and maybe even see if they make sense. Making a habit of writing is the hard part. Not sure how to go about doing that!

It worked for me when I was a teen (embarrassing as those journals are now -- pages of "I'm waiting for my boyfriend to call" and two lines about the first Dodge Poetry Festival. Ugh!)

My guy's also dyslexic enough to make writing a chore. Letting off steam thru sports helps.

So, what were those two lines about the Dodge Poetry Festival? Were they about the cute guys and the food?
T.

P.S. Yes, sports can be a big help! My son bounces off the walls if he doesn't get to burn off his energy.

Something lame like, "I adore Sonia Sanchez." No details about poetry, food, or cute guys. I could slap my teenage self.

I just discovered your blog, great work. I'm a fan of Hemingway's restraint, more than anything else. He almost never shows off.

I loved how you brought this back to your own child, and the sense of speculation and questioning that informed every word. No answers here, either, but it's more important to learn the questions.

I recently noted Karla Kuskin's death on my blog at jamespreller.com. One of her quotes came back to me, about writing: "The important thing about writing is that it helps the writer discover his or her own thoughts and feelings. In difficult times, I've always found that to write out what I feel is very helpful. I put it down and I begin to understand it better."

I can relate to those words. And it's why I encourage my oldest son to write with gifts of blank journal (though he's ignored them so far).

Great site. I'm putting it on my blogroll!

James, thanks! So glad you found me.

Hmm. I have to think about your point about a great book making us stop reading. I love being so absorbed in a story that I can't put it down. But "The Da Vinci Code" didn't do anything to change or deepen my thinking. It was cotton candy!

Looking forward to reading your post on Karla Kuskin.

Well, we all read for different reasons and get (and want!) different things from different books. Ugh. Lame sentence. There's nothing wrong with books you can't put down.

But when it comes to poetry, Laura, isn't that always the best case. The poem that swims in your head, that makes you lift your head up, lost in your own thoughts?

Sometimes I don't understand people who devour books -- I'm grateful for them, just don't fully get it. I read slowly, and the better the book, it seems, the slower it usually goes.

At the same time: Yes. Di Vinci Code, for example. A quick read; but not, I think, a great book.

Yes to poetry. My poetry workshop had a fabulous discussion about Frank O'Hara's "A True Account of Talking to the Sun at Fire Island." There's so much to talk about, but a poem has an intangible element -- maybe its the music -- that hits you in a place beneath words.

Who are some other authors you read? I loved A.S. Byatt's "Possession" when I was in my 20s. Now find it too dense to read. Don't know what's changed about me.

I'm not a big beach-read reader. Like you -- looking for more than entertainment.

Thanks for the discussion.