The ninth stop on our National Poetry Month tour of the U.S. is New Hampshire.

This state had some surprises for me. Newport-born Sarah Josepha Hale -- an author and journalist who campaigned for a national Thanksgiving holiday -- wrote the poem "Mary Had a Little Lamb" in 1830.
Am I the only one who thought it was a traditional rhyme?
New Hampshire became a state on 6/21/1788, but it was the first colony to declare independence from King George. That bit of history fits NH's "Live Free or Die" motto.
New Hampshire's poet laureate is Walter "W.E." Butts. He's currently serving a five year term. 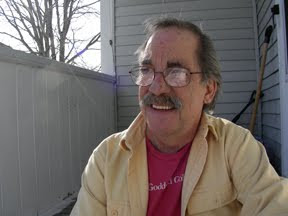 Part of the fun on our tour is finding poetry that reflects the landscape or personality of each state. Butts poem, "The Lake," reminds me of a trip I took to New Hampshire's Squam Lake (one of several lakes that claims to be the lake in the movie On Golden Pond.)

THE LAKE
Walter E. Butts
I don’t know how Father managed
that summer I was five,
on his factory pay,
to bring us to the glistening lake
and white clapboard cottage
for a week, its small rooms
filled with early July light,
and what seemed to me a thousand birds
singing through the open windows,
past the waving flowered curtains.
Perhaps he borrowed the money
from my uncle, who would be dead a few
years later, at fifty-four, the only time
I ever saw my father weep.
But we were happy those days,
my parents and I,
by that lake called “Silver,”
and in its bright water that returned us,
redeemed and shivering,
back to our currency of air.
Find the rest of this poem and another piece by Butts here.

Yes, Virginia, there is a Poet Laureate. Buckle your seatbelts...we're on our way to Virginia, next state on our National Poetry Month tour.
Posted by Author Amok at 4:28 PM

No, you're not the only one who thought it was a traditional rhyme! Very cool that... and cool touring, too.

Thanks, Gregory. I'd love to find out more of the story behind "Mary Had a Little Lamb." Glad you visited!