If it's made of paper and words, my ten-year-old will read it.

Mystery and fantasy are her favorite genres. She devoured the entire Sisters Grimm series, by Michael Buckley. So I was excited to pick up a book for her at ALA called, A Tale Dark & Grimm, by Adam Gidwitz.

It comes out from Dutton in November. The ARC I picked up is marked "Ages 10 up/ Grades 5 up," but my daughter found it way scary. I'll have to read the book myself to see what bugged her, but I'm guessing this one is more fantasy/horror than fantasy/adventure. 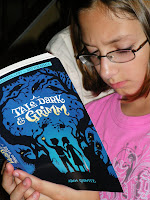 What was your overall impression of the book?
It's a tie between likes and dislikes. It involved quite a bit of blood and some stuff that people would think very disgusting and horrifying. What I liked about it, though, was that in some parts it was very humorous.

The story in one sentence?
Hansel and Gretel's true creepy life, including adventures like getting their heads cut off and killing a dragon.


Who were your favorite characters and why?
The three ravens can tell the future and they're in a way like narrators. They were cool. I liked that they could tell the future. That was a really neat idea.

What was your favorite part of the story?
When they killed the dragon, I liked that part. I can't tell you about it, because it would ruin the whole book.

What did you like about the cover?
It looks interesting. It's not an every day thing to see two trees with ghoul faces and a girl holding a sword with blood on it.

Would you recommend to a friend? What would you say?
I wouldn't recommend this book to anybody unless they don't get scared by violence and blood and stuff like that. If they're okay with that stuff, I'd say this is a pretty good book for them.

Mom says: You may want to check out another review here, or read the book yourself before handing it to kids on the younger end of 5th grade. You know best what your individual child can handle.

Thanks for the review. I think this was my favorite line: It's not an every day thing to see two trees with ghoul faces and a girl holding a sword with blood on it.

I'll pass the thanks along to the kid. It's a great cover. This book is next on my list. I want to see why it freaked her out.