Musing on Louis Armstrong -- An Interview with Muriel Weinstein 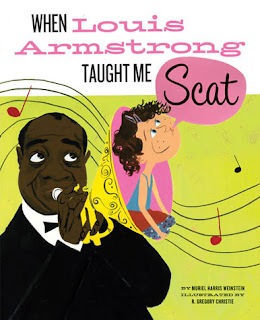 A few weeks ago, I reviewed a jazz picture book for Poetry Friday. When Louis Armstrong Taught Me Scat is a playful, rhyme-filled book, and a fun introduction to the music of Louis Armstrong for younger kids. The review is here.

I learned about the author, Muriel Weinstein, from a mutual poet friend (thanks, Shirley Brewer!) Shirley gushed about this poet and retired educator who, in her 80s, was starting a career as a successful children's author.

I had to speak with Muriel myself, so she's stopping by for the next few days to talk poetry, Jazz, late-life writing success and her muse, Louis Armstrong.

To whet your appetite, here is Satchmo playing "The Saints Go Marching In." Look for the Duke Ellington quote that opens the video clip.

Hi, Muriel. Congrats on your second book (PLAY, LOUIS, PLAY, published this month). What's your story? What led you to become a children's book author?


Hi, Laura! I've always written. As a kid, I remember creating my own magazine. I was the editor, the columnist, the interviewer and made up stories about everything from interviewing the milkman whose tin cart was pulled by a horse (his horse's hooves clopping on the gutter cement each morn awakened me) to interviewing imagined Hollywood stars. I even printed it myself.
Later, as a teacher, I loved the children's authors -- particularly Maurice Sendak. Even interviewed him and he sent me a note on how much he enjoyed the article. When teaching, I had stopped a lot of my own writing in favor of encouraging my students.
I think a lot of teachers who write have that experience.


Not till I retired did I start in earnest to write again. No longer motivating kids to write, I felt it was "my turn." Also, the arrival of grandchildren drove me to write stories for them.
Now I am writing full time. I have about a half dozen books in rough drafts. I can hear their voices shouting, "ME!!! ME!! take ME!! I'm NEXT!! Hurry! This drawer and file are like a PRISON."

What's it like to find publishing success as a senior senorita?

First, I must confess, I'm 87!! Cannot believe it. I look in the mirror and say, "That can't be me! I'm younger! Much younger!" What I'm really talking about is my spirit, my mental energy.
I love reading and selling and writing and am pumped up that I have my second book out (the chapter book bio, PLAY, LOUIS, PLAY) and can't wait for the third.
PLAY, LOUIS, PLAY is your second book featuring Louis Armstrong. How did he become your muse? What do you think makes him an interesting subject for kids to read? 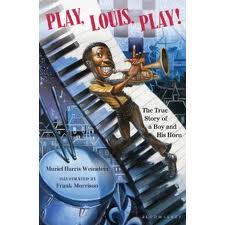 I come from a home that was filled with music. Dad played the French horn, my brother -- the violin, Mom had a lovely alto and I played the piano. Neighbors would come in and we'd all join in together. That's was what led me to Louis. LOVED his voice and music. To me he was Cooool. While I played piano and loved music, I had a horrific voice. I sounded as if I were gargling!! That's why I really liked Louis A. A man whose voice was not as smooth as silk or who slid so meticulously into the various keys.
My first book WHEN LOUIS ARMSTRONG TAUGHT ME SCAT only deals with one aspect of Louis, his "scat," the musical skill of finding nonsense words that match in rhythm and mood to the song.  PLAY, LOUIS, PLAY had to be researched. I had to read a great deal and cull what kids would be interested in.
I didn't want to do more than his youth because he had such a difficult, such a rough time that -- to me -- he is a heroic character. Other kids would complain about not having running water or an outdoor toilet or no bathtub or electricity. But Louis was the kind of kid and adult who only saw the "good" things. I fell in love with him while doing research.
The book is a testament to his strength of  spirit, but it doesn't clobber the reader over the head with that "message."


The innate good in his character shines out. So many have difficulties and  think they'll never rise above them. Louis did and his hurdles were huge.
I also think that today's kids do not  have enough heroes and Louis was heroic. While some bad things happened to him, he rose above them and kept his eyes on his goal and he made it! I refer to such poverty that he didn't have shoes till he was in the orphanage. I refer to being picked up and taken away to a Colored Waifs Home.
But, as you show in PLAY, LOUIS, PLAY, Louis made the best of that situation. Your book shows him playing successfully with the Colored Waifs Home's band. Even as a child, Louis used a difficult experience to get closer to his goal of being a musician.

I'll post Part Two of my interview with the fabulous and spunky Miss Muriel tomorrow.

Here is one final holiday treat. It's Louis Armstrong reciting "The Night Before Christmas." Enjoy!