The Shot Heard Round the World

In two days, I'm returning to Massachusetts, where my son (14) has been doing his Sea Cadet training. We finally received a letter from him last night. The friends he's made are helping him over homesickness. A passionately picky eater, he's trying new foods. And one of the petty officers had lost his voice after just one day of training.

We stayed in the Concord area for a couple of days when we dropped my son off. It's a must-see for history/American literature lovers. We didn't have time to see everything, so I'm hoping for more Concord trips in our future.

One of the things I wish my son had seen with us was North Bridge. We went on a brutally hot day -- so humid that my camera lens fogged up. 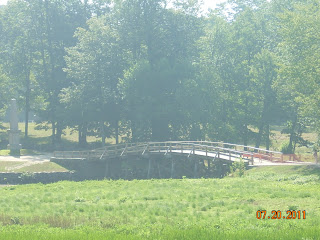 I tried to explain the significance of the bridge to my daughter (11). Meanwhile, the Schoolhouse Rocks song was playing in my head.

Now, the ride of Paul Revere
Set the nation on its ear,
And the shot at Lexington heard 'round the world,
When the British fired in the early dawn
The War of Independence had begun,
The die was cast, the rebel flag unfurled.

And on to Concord marched the foe
To seize the arsenal there you know,
Waking folks searching all around
Till our militia stopped them in their tracks,
At the old North Bridge we turned them back
And chased those Redcoats back to Boston town.

Read the rest or find a link to the clip on Youtube here.

We had already visited Orchard House, home of Louisa May Alcott. There, we learned that Alcott's sister May (Amy in the books), mentored Daniel Chester French, who sculpted this statue, The  Minute Man. He stands to one side of the bridge. 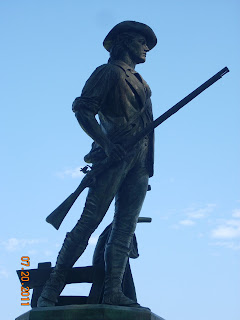 French went on to design the Lincoln Memorial. We also saw this memorial (on the other side of the bridge). 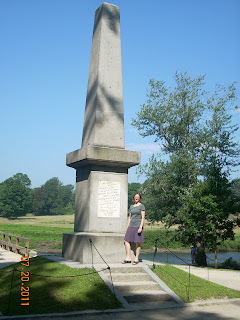 According to the National Center for Public Policy Research, Ralph Waldo Emerson wrote a poem "which was sung as a hymn at a July 4, 1837 ceremony to mark the completion of the Concord Monument, to immortalize the resistance of American Minutemen to British forces on April 19, 1775." The hymn is the genesis for the phrase, "The Shot Heard Round the World."

By the rude bridge that arched the flood,
Their flag to April's breeze unfurled,
Here once the embattled farmers stood,
And fired the shot heard round the world.

The foe long since in silence slept;
Alike the conqueror silent sleeps;
And Time the ruined bridge has swept
Down the dark stream which seaward creeps.

On this green bank, by this soft stream,
We set to-day a votive stone;
That memory may their deed redeem,
When, like our sires, our sons are gone.

Spirit, that made those heroes dare
To die, and leave their children free,
Bid Time and Nature gently spare
The shaft we raise to them and thee.

If you visit North Bridge, be sure to stop at the Visitor's Center. They have a great video-story from the show "History Detectives" about a cannon the colonists stole from the British and how it may have prompted the first battle of the revolution.

Also on site is Nathaniel Hawthorne's home, The Old Manse. We toured the home many years ago -- highly recommended.

Tomorrow, I'll bring you with me to Orchard House, setting of Little Women.
Posted by Author Amok at 10:07 AM