My husband has a dream deferred. For as long as I can remember, he's wanted to buy a beat-up antique car he can rebuild and customize. But we have kids and jobs, so --

when Baltimore announced it was hosting the Grand Prix, an IndyCar race, my guy bought four tickets as soon as they went on sale. 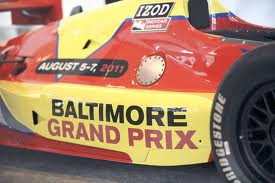 Today is the big day. I was looking for a poem about speed to post -- famous drivers like Marco Andretti and Danica Patrick are going to be racing around 2+ miles of Charm City's tourist district -- and I came across this lead from the Bleacher Report:

"There is a popular poem out there that talks about a fork in the road, and which path should be taken. Many everyday people find themselves in this situation a lot, and the drivers and teams in the IZOD INDYCAR Series are no different. One particular team will be faced with a new challenge this year, that can either take them on the path to destruction, or on the road to victory —literally."

I had to laugh about the mash up between IndyCar racing and Robert Frost's famous poem.

The funny (or unfunny) thing is, "The Road Not Taken" has taken on new meaning as Baltimore prepped for this race. Forewarned as B'moreans were, everyone's been screaming about the road closures. Traffic into the surrounding 'burbs was horrific on Thursday. One friend reported that her daughter's afternoon school bus ride out of Baltimore took two hours.


Which Baltimore persona will great the race, Charm City or Mob Town? Do you think the city has taken the wrong road in hosting the event? I'll report back from the race.


The Road Not Taken
by Robert Frost
Posted by Author Amok at 8:11 AM