Friends, it has been so long, I'm not sure where to begin.

I'll come back to explain why I am taking an online playwriting class, why I have been spending time with members of a Baltimore rockabilly band (circa 1950s/60s) called the Roc-A-Jets, and why all of this is extremely scary.

The prospect of writing a play makes me feel like this, with a lot of nail-biting and crying at random people added in: 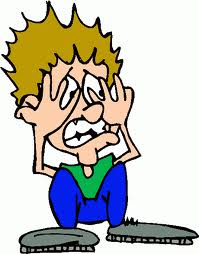 Some quick background. In a former life (right out of high school), I went to NYU's Tisch School of the Arts to study dramatic writing. It was the only school that had a real writing program for undergraduates (everywhere else, you had to study English with a creative writing minor). I wanted to be a writer and NOT in a minor way.

Naturally, as I was nearing graduation, I realized that I was a poet, not a playwright or screenwriter. I remember walking into Mark Dickerman's office, trying to convince him to let me write a book of poems, instead of a screenplay, for my senior thesis project. His reaction can be summed up in one word: "Ha!"

(Don't even ask about the thesis project. That was a big lesson in "write what you know" and I knew nothing about the world of professional wrestling.) 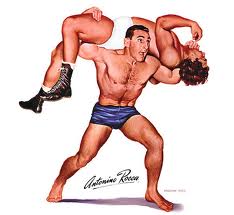 It's been over 20 years. I have been working successfully, all this time, as a poet and educator. And now I feel like I'm back in Mark Dickerman's office saying, "I want to write a play." And he is saying, "Ha!" in my memory.

Enter, Liz Duffy Adams. I am taking her online playwriting course. I'm hoping I can still ride that bike, but training wheels won't hurt while I'm getting started.

The first exercise was to write a bad play, just 3-5 pages, including things the writer does not like to see in theater. Take a guess -- what's on my top ten list of things I hate in a show?

BTW: The exercise required using a word we think is funny, repeated ad nauseum (like "ad nauseum," I guess the point is repeating the word until it is more grating than funny -- like, "What you talkin' bout, Willis?")

My all-time favorite funny word is "pamplemousse," French for grapefruit.

Laugh with me, laugh at me, I don't mind. Throw a few french grapefruits at your screen. As a friend pointed out, it is leap year. If you're going to take a leap, better take it now.

Wow, what a fun post! A bit of personal backstory and a slapstick play with lots of pamplemousse! I know you were trying to write a bad play, but I kind of liked it. Sorry!

Hi, Tabatha. I'm glad you liked it. It was fun to write. Turns out, that was the point. The instructor wanted us to see that bad is better (often WAY better) than nothing, that we can be frozen when our expectations for our own writing are unrealistic. Better to write a bad play than to be author of the perfect play that never gets written.