What Is a Prompt?

When I'm working with elementary schoolers, I define writing prompts as: "When authors give themselves a homework assignment." If we were athletes, prompts might be the drills we'd run through -- like running around traffic cones.

Getting a poem out of a prompt is like scoring a goal at the game after putting in a hard practice. Sometimes it happens. Sometimes not.


This week, I asked each of the poets visiting Little Patuxent Review from North Carolina to send me a poem and the prompt that inspired it.


You may have seen Richard Krawiec's response -- beware of prompts that are really just gimmicks. As in Debra Kaufman's poem yesterday, a good writing exercise is designed with room for the poet to make choices about subject, structure, and tone.


The third member of our literary exchange is Stephanie Levin -- a Baltimore native! and award-winning poet based in Chapel Hill, NC. She has a book, Smoke of Her Body, forthcoming from Jacar Press. 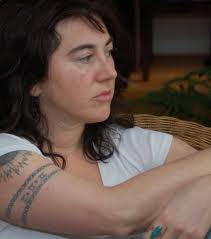 Stephanie says today's poem "was born from a self-imposed prompt that was meant to make me feel like less of an outsider to formal verse.  I’d studied meter and rhyme, admired sonnets and villanelles from afar, but never connected to formal verse in a way that made me feel as though I could, myself, write in that manner. And then I read Kim Addonizio’s poetry, and I felt the top of my head come off.
"For the first time, I recognized a matching of sound and sense that felt completely inevitable.  For the first time, I got it.  The poems that pushed me over the edge, though, into being determined to try form in my own writing were her paradelles – a form created by Billy Collins to make light of the elaborate requirements for forms like the villanelle.
"Collins’ own paradelle is so wonderfully ridiculous.  Its dead-pan tone brought to light the self-importance I feared would plague any of my attempts at formal verse.  The paradelle was an invitation to be shameless.  So here it is: my first paradelle.  I don’t love it.  But I love the door into formal verse that it has opened for me."
Turning 35:  A Paradelle
by Stephanie Levin
It’s not aging, just an errant strand.
It’s not aging, just an errant strand.
White wire poking from my hair.
White wire poking from my hair.
Not just from poking it.  Wire hair.
Strand my white, an errant aging.
What’s next: deep creases in the neck?
What’s next: deep creases in the neck?
My arms as chilled pudding?
My arms as chilled pudding?
What’s chilled increases.  Put in
my next neck.  The arms as deep.
This is the only life.
This is the only life.
I won’t repeat this skin.
I won’t repeat this skin.
Repeat only this:  I won’t.
This is the life’s kin.
Here is an explanation of the paradelle form. You can also visit my friend, poet Ken Ronkowitz' literary blog, "Weekends in Paradelle."
Meet Stephanie this weekend at one of Little Patuxent Review's events. Friday, March 2, LPR is sponsoring a reading.  Stephanie will be one of the featured poets. It runs 6:30pm until 9:30pm (reading begins at 7, open mic at 8) with light food, wine and maybe even music. The reading is hosted by Wisdom Well, 8955 Guilford Road, Suite 240, in Columbia.
Saturday evening is Little Patuxent Review's Social Justice reading at The Writers Center. Debra will be a reader and panelist. The reading begins at 7:30 PM.

My favorite book on formal verse is A Handbook of Poetic Forms. It's a bit outdated. You won't find new/ currently popular forms like paradelle, fibonacci poems and haibun there. Maybe one of you can recommend a new book on form for me. 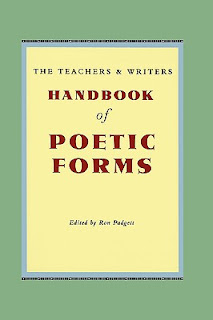 By the way -- a great prompt or exercise for revision: run your draft through an unexpected form. It might feel like you're racing around cones, but you may make some useful discoveries about the poem.
Posted by Author Amok at 1:49 PM