Who is that unmasked man?

This year's Shovan Family holiday card featured the four of us, with a cameo appearance from a famous statue.

I grew up visiting my grandparents in my mother's native Nottingham, so I was shocked (shocked, I tell you!) at the number of people who inquired about our mystery man's identity.

Three points for those of you who guessed Robin Hood. This iconic statue can be found outside Nottingham Castle in the English Midlands. 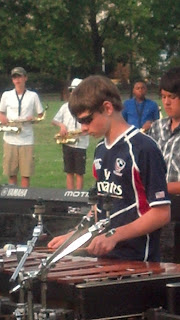 5. Julia sounds like an angel on the clarinet, but she's a beast on the field hockey pitch. 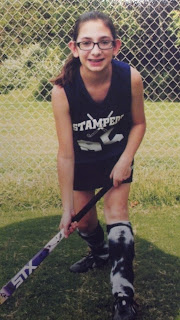 4. Laura's poem "Fringe" was a finalist for the 2012 Rita Dove Poetry Award. Still busy as editor of Little Patuxent Review.

2. Laura, Robbie and Uncle Jay were winners at the Warrior Dash. 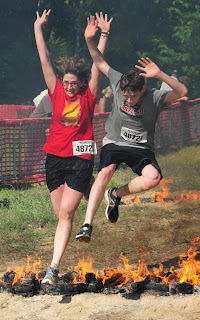 1. We had a great time visiting London, Nottingham (where Nana grew up -- Hi, Auntie Susan!) and Edinburgh, where this photos was taken:

Tonight, we are taking it easy. Robbie is in Florida for the Gator Bowl parade and game. Poor Julia is starting the new year with no wisdom teeth. My brother and his crew are stopping by for spaghetti arrabiata with lobster and chocolate souffle. I hope our patient is up for a visit from her little cousins!

We'll sign off with the final stanza of John Keats' poem "Robin Hood."

Wishing you a happy and healthy 2013 from all of the Shovans, including Sam. His top ten would include visiting the grandparents in the Catskill mountains while the rest of us were with our "Sherwood Clan." 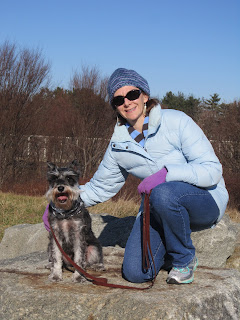 Happy New Year, Laura! I love your top ten and your Robin Hood connection. Clarinet and field hockey? That was me, too, haha! Hope your evening is lovely and that 2013 brings you much joy. :)

The Nottingham comments in your post reminded me of our first visit to Sherwood Forest in 1992. Somewhere in Italy is a home video that an Italian tourist took outside the Sherwood Forest visitor's center that includes my son, Zach (18 months old at the time), looking very cute in his felt forester's cap and felt shoulder yoke, and having his cheek pinched by an Italian woman saying "ah, Bambino! Bambino!"

So, honour to the Shovan clan, performing activities with such élan! I loved hearing your top ten for the year & it does sound like such a year, Robin Hood and all. Happy New Year Laura!

Loved your list and photos so so much! Also, Linda's little Shovan rhyme was perfect! :-)
How was the chocolate souffle? I've never made one. We had fondue last night (chocolate and caramel for dessert, cheese, gravy and broth for dinner).
Hope today goes smoothly for your patient!

Thanks for stopping by and for the comments, everyone. We are having a rough recovery from the oral surgery, so my focus is on kid TLC. Wishing you all a wonderful New Year!

Oh, Tabatha -- we had so many holiday cookies left over (and fresh, soft brownies from a friend for the patient) -- I skipped the souffle. Will probably do it this weekend. It's easier than people make it out to be and SO delicious.