It’s Poetry Friday. Today, we bid a fond “see you later, alligator” to the 44 Postcard Project.

I’m checking in from the AWP Conference in Boston. When I arrived on Wednesday, the first thing I did was hoof it to Boston’s Museum of Fine Arts to check out an exhibit of vintage postcards.

While I was looking at a postcard from Skegness, England – the beach town where my family used to vacation – a woman in the gallery struck up a conversation.

She turned out to know the owner of the vintage postcard collection, Leonard K. Lauder (as in Estee). I told her about my poetry postcard project and she had some insights into the exhibit. Fascinating!

How am I feeling, now that I’ve completed all 44 postcard poems? Like this: 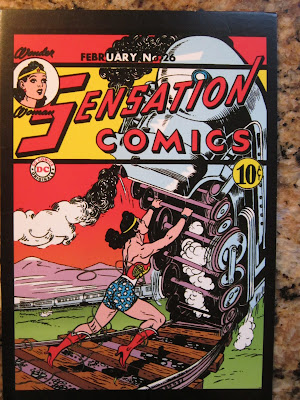 The Task at Hand

If I attacked
each daily chore
with Wonder Woman’s
musculature,
jetting, red-heeled
here to there
in blue, starry
underwear,
I would deserve
a gold tiara
and bullet-
stopping cuffs.
I would crush tasks
in my able hands
and wonder
have I done
enough.

Yesterday, my poetry card was full at the AWP Conference. I attended a session about the Afghan Women Writing Project. Talk about Wonder Women -- they are super poets and super brave. (They are looking for mentors. Find out more here.)

Later in the day, I went to a panel on verse novels, which included Rita Dove. Her Sonata Mulattica has been on my to-read list for several years, since Dove spoke about it on the Diane Rehm Show.

I’m going to have to wrap up the postcard project when things are a little calmer. Next week, I’ll post a cheat sheet, listing the poems in groups based on their themes, as well as providing links to each of the poems by number.

For now, here’s some data on where the 44 postcard poems traveled:

Am I ready to quit? Not 100%. I plan to continue writing postcard poems, but will shift to one or two a week for the rest of 2013.

Today’s Poetry Friday host is my dear pal Heidi at My Juicy Little Universe. Stop by and leave a little greeting, or a link to your poetry post.
Posted by Author Amok at 7:03 PM

What a journey it has been, Laura, following this postcard trail of poetry and humor and history! Befitting that you end with Wonder Woman - you've earned that title! And your conference in Boston sounds wonderful - I love Boston, the Red Sox, Fenway Park, the Gardner Museum....all of it! Safe trip home...

Hi, Tara. Thanks for following the project. I identify with Wonder Woman not so much for her super powers, but because no matter how much she does, she always feels pulled to do more. It was interesting that the postcard brought that up for me. We are snowed into the conference center and hotel this morning. Good thing I went to the exhibit before it started snowing!

If we get plowed out here in NH, I'm going to try to get down to the AWP exhibit area tomorrow. Maybe we'll run into each other.

Diane it looks wild out there this morning. I hope you make it. I will be at table x13 upstairs until noon.

With the postcard project completed, you SHOULD feel like Wonder Woman! (And roping every agent/publisher you come across with the Rope of Truth could yeild a wealth of information!)

What a WONDERful way to end this fascinating series - and I LOVE the final poem. I have so enjoyed following these postcards and have marveled at all the many moods and tones and worlds you have created through them.

I keep mine propped on my desk and look at it when I need to feel like a tangle-haired Parisian girl (which is more often than you might imagine). :)

Laura, I feel lucky that I was one of your postcard buddies, and got to follow this fabulous journey of yours. What a great ending, starry underwear and all. I love the beginning four lines of rhythm/rhyme, and see that, like all women, she and you keep thinking that you should do more. Like Heidi's post, it's the International Woman's Day, a fitting day for your ending!

Congratulations on a whirlwind journey around the postcard world in 44 days or so!! This poem speaks to the wonder woman in you! So glad you will do more. And lucky you getting to that exhibit. Did you know about it ahead of time? I am definitely gathering my old postcards to see what I might whip together to try with students!!! I buy postcards when we travel so have a big collection for the travel scrapbook I have yet to create!! But the "old" postcards have a j'ne sais quois feel to them. Enjoy the rest of your conference. Janet F.

Congratulations on a job well done, Wonder Woman, and what a way to celebrate your birthday! I do hope you're wearing a golden tiara, at least in spirit, and all the time. Loved being a recipient - thanks for sharing your curiosity, discoveries, and insights with all of us!

You did it, and are indeed a Wonder Woman in more ways than one! It's been fun to see all the vintage postcards and to read your poetic responses to them. How nice to see the vintage postcard exhibit at the museum and to talk to that woman. Sounds like you're having all kinds of cool adventures at the Conference too. Can't wait to hear more.

I got completely side-tracked by the Afghanistan Women Writing Project (bought their book while I was over there!) but I'm back. Congratulations on your Wonder Woman status! My parents bought me a Wonder Woman magnet once when I'd completed a project and I still have it on my fridge. I'm glad that you aren't stopping the poetry postcards entirely. It's been fascinating.

Laura, I attempted leaving a comment earlier but I don't know if it cooperated. Please do wear a golden tiara - you deserve it! What an inspiring project you've shared with us all.

Congratulations, Laura, on an amazing project! And thank you for sharing it with all of us! You ARE a Wonder Woman! =)

Laura,
I LOVE your Wonder Woman poem. GREAT! It has been so much fun reading the poems and seeing the postcards along this journey. What a delight to meet a woman from Skeegams
while you were at the gallery. Your cards and poems would make a great exhibit.
Thank you for sharing your journey, stay warm.

So totally fun, Laura and how great to be immersed in poetry workshops.

Congratulations! What a wonderful project. Thanks for sharing it. You deserve the tiara and the bullet-stopping cuffs.

Laura, I've been following your posts about writing post card poems and have enjoyed them very much! What an accomplishment!

513451345My congratulations were sincere, Laura, even though I have doltishly and totally missed the beginning and middle of this project. I'm just in awe of the idea, never mind the interesting, interesting poems that I begin to see have grown out of it. Wonder Woman indeed. Wish I could knit you some star-spangled undies!

Congratulations Laura! You do deserve to be called a Wonder Woman! What a wonderful feat, and one that I am more than certain your students found extremely meaningful. :) The conference also sounds exciting! I have a thing for verse novels, will check this one out.

Wonder Woman, indeed! And you've inspired me to dig out my Great Aunt Edna's poetry collection and MAKE SOMETHING of it!