Poetry Postcard 39: Cream for your coffee or tea?

I love the randomness of this postcard. 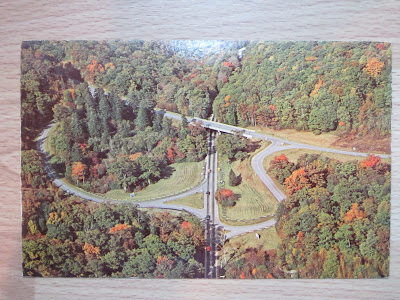 The roads made me think of how busy life is, especially this week as I prepare to go to the annual AWP Conference. (You’ll find me at table X13, representing Little Patuxent Review. Stop by to say hello!)

We use such odd terms for highway constructions – terms that have nothing to do with speed. Cloverleaf. Jug handle. Artery. I was thinking about that and the trees in the photograph, which reminded me of my parents’ home in the Catskill Mountains.

The jug is small,
a creamer glazed blue,
chip in its rounded lip.
The potter who lives
down my parents’ street
spun it on her wheel.
The handle seems
an afterthought,
the clay a bowed piece
of pulled taffy
hardened in the kiln.
They spend summers
in the mountains−
the potter, my parents−
where a jug handle
is what my mother uses
to pick up the old creamer
when someone has stopped in
and said yes, he has time
for a cup of coffee.

Speaking of tea and postcards, both figure prominently in one of the most inventive children’s books we own, The Jolly Pocket Postman.

It was written and illustrated by Janet and Allan Ahlberg, first published in the U.S. in 1995 by Little, Brown and Company. The U.K. edition (also 1995) published by William Heinemann Ltd.

Think of this book as a mailman’s guide to your favorite, classic children’s stories, with a little taste of Griffin and Sabine thrown in to keep it interesting.

The first page is an envelope. It’s addressed: “For You.” Open it!

Inside is a postcard. The poem on the back begins,

“Dear Reader, pleased to meet you;
Welcome to this book.”

The greeting explains that the pocket you have opened also contains a little magnifying glass, which you'll find in its own envelope. 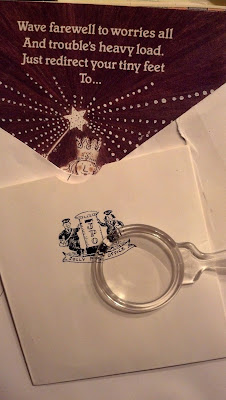 Then the story, written in verse, gets going.

"Once upon a summer’s morning,
The Jolly Postman woke up yawning,
Cooked his breakfast, fed the dog,
Read the paper, kissed the frog…"

We follow the postman as he makes deliveries to Rapunzel, gets bonked on the head by a giant rattle falling from the sky (he may have passed a little too close to that beanstalk), and slides down a familiar rabbit hole. There, we find a spiral message. 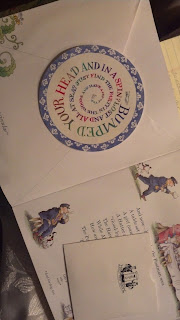 Every other page or so is a pocket. One has a map entitled “Follow the Yellow Brick Road.” Old McDonald’s Farm, The Emerald City, The Neverland, Mr. McGregor’s Garden, and The Land of Counterpane are some of the places featured on the tiny map.

Several other pockets contain stories within the story, for which you will need that magnifying glass.

The book ends with a postwoman delivering a special message to our hero.

The Jolly Pocket Postman is out of print, but you can find used copies. For the price of a new copy, you could send a whole lot of postcards.

SOCO GAP
Scene Soco Gap, at the intersection of the Blue Ridge Parkway and U.S. 19, is the marked boundary of the Qualla Reservation of the Cherokee Indians and was the gateway to the last Cherokee stronghold in Western North Carolina.

Oh my, Griffin and Sabine!! LOVE THOSE BOOKS. I will have to meet the jolly little postman too. :) I also love where you went with this poem. Makes me want to find the metaphor for our most popular interstate intersection: "Malfunction Junction." Have fun at AWP! xo

Hello, Irene. So many people have mentioned G&S in connection with my postcard project. It's been years since I read the books. I'll have to go back to them!

Alright -- now you have challenged yourself. I look forward to your Malfunction Junction poem.

Laura, AWP is just down the road from me (I'm in southern NH). Maybe I'll head down and go to the book exhibit, since it's free. If I do, I'll be sure to stop by X13!

OMG! I LOVE the Jolly Pocket Postman. I'll have to dig out my copy.

Faboo poem, Laura -- I confess though I've heard cloverleaf and artery when it comes to roads, I'd never heard of jug handle (and my civil engineer husband used to design highways and interchanges).

BUT, I do love the jug handle in your poem so that evens it out, right? :D

Diane -- It would be great to meet you at last! I hope the weather cooperates this week.

Jama, thank you for the note. I had a feeling you'd know about this book. I had to ask my husband (an engineer by training, but not in practice) exactly what a jug handle is. As it turns out, NOT what is pictured on the post card. But I think of the cards as jumping off points so, yes, it evens out.

I don't have the Jolly Pocket Postman, but have The Jolly Postman. This looks wonderful! I love your jug handle poem, Laura, a little memory captured because of a postcard. Nice to see the picture too! And we have a place where two highways intersect that's called the 'mousetrap'!