One of my favorite Android apps is TuneIn Radio. It's a free app that gives me access to radio shows and podcasts from around the world. I can go through a list of local radio stations and listen live, but I can also search by themes, such as Arts and Food. Best of all, I can do a search.

When I type "Poetry" into my TuneIn Radio search, I get shows and podcasts that don't play on WYPR or WAMU, our local NPR affiliates. There is Poetry Radio, Poetry Show, Poetry off the Shelf (a recent episode was about the 2013 Ruth Lilly Poetry Prize), Poetry Lectures (talks given by scholars and critics), New Books in Poetry.

I love podcasts. They're great to take on a road trip or to liven up a commute. (RadioLab is my favorite podcast to combat the boredom of folding laundry.)

Washington, D.C. is justly celebrated for its many monuments, historical sites, and innumerable works of fine art from all ages and cultures. Political debates sound in and around all three branches of government and somehow, seemingly against all odds, the important work of governing our country actually is accomplished. Less well known about our city is that it is a rich in poets and poetry, past and present, some echoing and drawing from the great historical and political events transpiring here, others limning timeless themes of literary art.
On a recent Saturday morning, I was able to explore some of Washington’s poetic treasures, thanks to a podcast created by the Poetry Foundation. Beginning in the Great Hall of the Library of Congress, moving past the Capitol and along the National Mall, and finishing at the National Archives and Navy Memorial site, I marveled anew at the beauty of my city while listening to the words spoken by some of the many poets who have lived and worked here or been inspired by our sights or our history.

Narrated by poet and D.C. native Elizabeth Alexander and featuring commentary by scholars and poets, the podcast takes the listener on a poetic journey, enlivened by the voices of the poets themselves performing their works. The tour is far too rich to describe in detail, but highlights include Robert Frost’s famous reading of “The Gift Outright” at John Kennedy’s 1961 inauguration, Ms. Alexander’s own inaugural poem for the 2008 inauguration of Barack Obama, Jane Shore’s deeply moving narrative of a visit to the Holocaust Museum, and Yusef Komunyakaa’s equally powerful “Facing It,” confronting the Vietnam Veterans Memorial.

A real revelation to me came from a poet not usually associated with Washington, William Carlos Williams. Having been offered then denied appointment due to suspect political connections as Poetry Consultant in 1952, Williams nevertheless visited D.C. as a tourist and produced a lyrical and satirical vision of the Capitol building entitled “It Is a Living Coral.” While perhaps not among his finest poems, it offers a fascinating mélange of wonder and sardonic observation especially entertaining to anyone who has visited the Capitol and marveled at its design and many decorations.

No account of Washington poetry would be complete without a discussion of Walt Whitman’s Civil War sojourn here, thus the listener is invited to visit the Portrait Gallery where Walt nursed wounded soldiers while hearing a passage from one of his poems describing his experience. And finally, D.C. poets Sarah Browning, David Gewanter, and Kenneth Carroll remind us that poetry is a living entity here, producing poems of witness and engagement in response to injustice and war.
Maps are provided to accompany the audio and locate the sites to be visited. It would, I suppose, be possible to take the tour virtually, especially if one is familiar with the city. But I would strongly recommend hitting the streets and experiencing the beauty and power of these poems while surrounded by that of Washington itself. Tours of New York and Chicago are also available and I hope that Baltimore might soon join the list.

The podcast and map can be downloaded at http://www.poetryfoundation.org/gallery/walking-tours/dc/index
—Gregory Luce

I look at my feet
on the sidewalk
ready to take me, well,
nowhere in particular,
especially with this breeze
blowing from some direction
I can’t quite make out.
A city of 45-degree
angles and circles
with five or fifty ways
to get anywhere and
here I am as entangled
with the ground as this
corkscrewed old tree
my hand presses
against.  I look up:
The sky is a blue net.

Gregory Luce is the author of the chapbooks Signs of Small Grace (Pudding House Publications) and Drinking Weather (Finishing Line Press), and the collection Memory and Desire (Sweatshoppe Publications). His poems have appeared in numerous print and online journals, and in the anthologies Living in Storms (Eastern Washington University Press) and Bigger Than They Appear (Accents Publishing). He lives in Washington, D.C., where he works for the National Geographic Society. 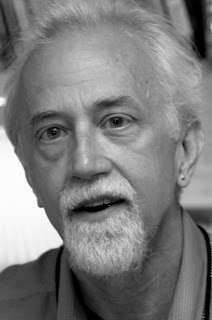 Greg sent me this note: "The tour is actually in two parts (or loops, as they are referred to in the podcast); I only took the first, which runs from the LoC, down the Mall (with an unmapped side trip to the Zoo for Randall Jarrell's poem set there), and over to the Portrait Gallery & Archives. The second moves up into Shaw, Adams-Morgan, Dupont Circle, etc. I was only able to complete the first. (I want to do the second but haven't yet had time)... there is more to the tour than I was able to describe [here.]"

Thanks for taking us along with you, Greg. I agree--Baltimore would be a great city to include on this list of poetry walking tours. Charm City boasts Edgar Allan Poe, "The Star Spangled Banner," and Ogden Nash.

Tomorrow is Poetry Friday. Christine Hurley has a technology-based poetry project for your students. Meanwhile, enjoy a spring walk while you take in a poetry podcast!
Posted by Author Amok at 9:36 AM

Enjoyed "Equinox." "The sky is a blue net" gives me something to think about...

Thanks for the poetry map. Have you seen the poets' graves maps?