First, a warning. This post (at least my introduction) is not exactly kid-friendly. Because we are going to talk about texting and the joys of Auto-Correct, which -- more often than not -- should be called Auto-Incorrect.

Today's exploit in the TechnoVerse begins with a story. In that story, there is a photograph of me, resembling Cher circa 1980.

My brother shared this gem on Facebook with the comment: "I'd post the 'If I could Turn Back Time' video but it's super no appro pro."

That would be the Cher video in which she performs for sailors on a Navy destroyer. You remember. She is gyrating on the guns wearing a see-through black costume with not much more than a black maxi-pad over parts we'd rather not see.

(If you absolutely insist on refreshing your memory: http://www.youtube.com/watch?v=BsKbwR7WXN4.)

Of course, my brother posted a link to the video after some goading. I watched the whole scary thing and replied from my phone: "That's the one. The shots from the back are...disturbing." By shots, I was referring to the camera angles that show Cher's almost bare, skinny rear end.

However, Auto-Correct does not know about music videos and camera angles. It had a different idea. So, what I actually posted to Facebook from my phone was this: "That's the one. The shits from the back are...disturbing." Which sent my sister-in-law into hysterics, which made me go back to re-read what I had posted. I was laughing so hard, I fell up the stairs. For real.

But Auto-Correct isn't all shits and giggles, people. It has purpose, even when it gets things wrong. Here is one of Baltimore's best-loved poets and poetry cheerleaders, Clarinda Harriss, to tell us how she is making poetry from Auto-Correct's faux-pas.

Auto-Correct as Poet and Muse

Sometimes I call him Otto. Other times I call her Ada. I am ambivalent about the gender of Auto-Correct, s/he of startling intrusions upon one’s effort to write via iPhone, iPad, or “real computer.”  S/he is a hardheaded, softhearted creature, and I find I resort to standard gender stereotypes when ascribing his/her efforts to one of his/her genders. I shall shamelessly resort to such stereotypes in this discussion of Auto-Correct: Poet and Muse.

Consider my theory that Otto/Ada is/are indeed a poet. Observe, with me, that Otto/Ada takes the ordinary and makes it strange again. (Which famous human poet said that was the role of poetry?)

Witness what I regard as his/her finest effort: changing my text-message attempt at brevity—“tx dear heart” (tx standing for thanks, of course) to “Taxed at heart.” The poet in him/her not only came up with a stunning and original phrase, to do with what s/he will, but also provided me with the start and direction of a whole series of my own poems.

Ada is sensitive to my moods. She often changes a hurried closing,

to something much closer to my reality at the time:

Otto is hardheaded and stubbornly old-fashioned. You all know this side of Otto. He insists that each new line of a poem start with a capital letter, something most poets gave up around 1950. You have to go back and forth with him three times before he will grudgingly let you de-capitalize, and he never gives up; he’ll do the same thing with every poem you write. According to some, you can go over his head to his employer, Word, and force him to accept your more modern approach to lineation; however, I myself have never succeeded in changing his somewhat calcified mind. Otto knows his Freud. I suspect that they actually knew one another personally.

When I jot down notes toward a poem using my iPhone or iPad, I may write something like this: “I know what u feel.” Otto changes it to “I know what I feel.” My essential self-centeredness is exposed. A dear and brilliant poet friend of mine once claimed that he believed all poems are love poems and that most are self-love poems. Otto’s with him on this.

Ada, in fact, shares with Otto a general distaste for the inelegance of text abbreviations. For example, “Tx!” is always “Tax!” Thus a simple, prosaic “Tx for everything!” becomes the much more poetic, albeit quite political, “Tax for everything!” Again, she is both poet and muse.

As I mentioned before, Otto/Ada have started me on a series, perhaps even an entire chapbook, to be called simply “Mistakes.” I am inspired by mistakes. One of my favorite recent poems is called “Thank you, Gentopia,” a tribute to the wondrous misreadings my particular eye problem affords me. (Not all inspiring mistakes are Otto/Ada’s doing.)  This series is barely begun, but my auto-correct poet/muses did leave a haiku in my typewriter.

Taxed at heart, beset,
Meaning to feel what you feel
I feel what I feel.

by Clarinda Harriss, posted with permission

Check out Otto’s capitalization—and his correct syllable count. Note that Ada sly added a few by giving the haiku a title. Feel what Ada and I are feeling. 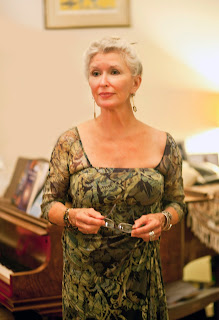 Clarinda Harriss, co-editor of Hot Sonnets: An Anthology, is a professor emerita of Towson University, where she taught for decades and chaired the English Department for one of those. Recently CityLit (Baltimore) instituted the Harriss Prize for Poetry in her honor.  She directs BrickHouse Books, Inc., Maryland's oldest literary press. In her continuing work with prison writers, she has done as much jail time as many felons; several BhB books have come out of that work. Her own most recent books are Air Travel, Mortmain, and Dirty Blue Voice. A chapbook working titled Old Stolen Car is in the works; a collection of her prizewinning short fiction will come out in 2013.

Tomorrow in the TechnoVerse, children's author Debbie Levy shows us a dictionary app. We might need it to decipher Auto-Correct's "translations" of our poetry.
Posted by Author Amok at 9:20 PM

I wish I could remember some of the 'words changed' that friends have posted on Facebook. I guess now we need to take closer looks before hitting send! I sometimes try to send "te he" and that te just can't BE! Thanks for the laughs!

J Updik is the poet n author who spoke of making the ordinary strange, Tim Ward

You look great in the wig! =P