When our children were young, my friend Jennie and I used to email original poems to each other. It was a way of laughing (instead of crying) over the insaner moments of our stay-home-mom lives.

My favorite of these poems was a beautiful ballad, written by Jennie. It told the story of the sea monkey kit that accidentally ended up in my washing machine, along with a load of whites. The poem was entitled "Sea Monkeys in My Underpants."

Today, poet Carol Munro of Massachusetts is our tour guide to the TechnoVerse. While the poem she composed with a friend doesn't have any sea monkeys, it does have the sense of playfulness that's possible when you banter emails with a buddy.

Poem Volley: A Give and Take of Poetic Expression Via E-mail

The e-mail subject line asked, “Want to play?” My friend Paula had sent me a short, rough-draft poem she had quickly clacked off on the keyboard and asked me to send one back. Poem Volley, we called it, and we played it for a year.

She explained the rules of this literary sport: Pull a line from her poem and use it in one of my own. Write it quickly. No worries. Just see what comes, write the draft, and send it off to her. She’d pull a line from my poem…

And so the volley would go.

Could I do this? I imagined myself pulling out a line, sending it back as a Haiku. Easy peasy!

"Seriously, I can do this," I thought. "It’s the perfect sport for me. I get to enjoy Paula’s creativity and build my own creative muscles stacking up a pile of poems. All via e-mail. No printouts, no traveling to meetings, not even a single trudge to the mailbox to return a volley. No sweat!"

I pulled a line from Paula’s poem and shot one back at her. The volley began.

After a week or so, I got the idea that I should be keeping these poems. It might be an enlightening study of patterns in our writing, topics we explore, and how our work changes (improves?) over time. Or maybe just a cool thing for us to find stashed away twenty years from now. I copied the week of poems into a Word document and added new ones as we wrote them.

It was fun, anticipating a poem in my e-mail, popping a response back to Paula. Our energy was high, with three or four volleys every couple days. After the first month, it slowed down some, to that many in a week, but the fun didn’t fade. (Um…yeah, I think I can speak for Paula here. We were having fun!) And the practice became more rewarding, with satisfaction in maintaining the effort itself and, of course, in the work created, rough as it was.

Twice during the year, Paula and I reviewed our work. We pulled out a few strings of poems we thought were redeemable and got to work critiquing, editing, cutting, building, changing line breaks, putting them back the way they were. After a final polish, we had the gall courage to read them at coffee houses. The nice people in the audience applauded.

Come December, I couldn’t let the year simply end, so I created a hand-bound book for each of us. A celebration of time spent with my dear poet friend. 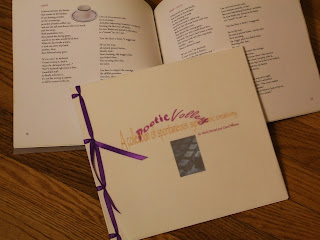 Could we have done this without e-mail? Sure. Maybe. But the technology makes it so much easier to play this literary sport. Score a win for both of us.

This is a first draft poem written during our Poem Volley. Paula had written a poem about youth and old age. I pulled “who’ve orbited with the spinning earth” to use in my poem.

When pinks and yellows
of a spring bouquet
cut and arranged by your hand
arrived at my work desk,
you gave me wings
like the angels.

When you brush a strand of hair
from my cheek,
kiss my neck, play with
the button on my shirt
before undressing me,
I soar.

I orbit the spinning earth
when I smell your scent
on your shirts, watch
our children play.

And now, when I hear
there’s someone else,
the earth lets me go. 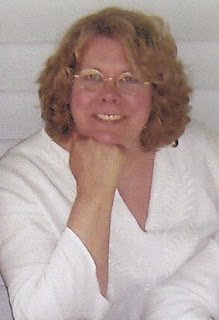 Carol Munro owns a freelance writing business, Just Write Words, serving a variety of clients from upstarts to Fortune 500 companies. She teaches writing workshops, provides critique and editing services to professional writers, and creates hand bound books. In November 2012, she completed the poem-a-day challenge to benefit the Center for New Americans in Northampton, MA, and was published in their anthology, 30 POEMS IN NOVEMBER. She’s a member of the Society of Children’s Book Writers and Illustrators.

Carol, thank you for guest blogging about the TechnoVerse today.

There are some group-effort poems happening -- thanks to technology -- during National Poetry Month. Check out Irene Latham's progressive poem project at Live Your Poem. And Heidi Mordhorst's 30 Words, 30 Days poem (with words contributed by her readers) at My Juicy Little Universe.

Tomorrow, poet Dennis Kirschbaum is guest blogging. I've been nagging him to let me know what he's writing about --  nagging is something else email is useful for -- but he says it will be a surprise.
Posted by Author Amok at 6:01 AM

My sister and I engaged in something similar a few years ago on New Year's Day. I posted a haiku as my facebook status:

My sister (living in Florida at the time), responded with:

We continued on like this for a good portion of the day with more haiku, modified haiku, and one tanka. The complete string is on my blog page at http://skiminocycle.blogspot.com/2010/01/new-years-day-poetic-e-parlor-game.html

What a fun idea! Thanks for sharing Carol and Paula's Poem Volley. This seems like a great classroom activity.

Now, are you going to share "Sea Monkeys in My Underpants"?

Love the poem 'story' you shared. It's a lovely idea to do with a friend, & you're right-fairly easy with the e-mail. I used to do this with my students & we called it Poetry Tag. They loved doing it, & we published the work! Thanks Carol & Laura! I'd also like to hear more about those sea monkeys!

Poetry volley is one sport I can fully support. Thank you for sharing, Laura! xo

I love this game of Poetry Volley! I have a friend in mind I want to play with - thanks for the idea! I truly enjoyed reading Carol's post and was struck by the force of her poem.

What a fun idea to do with a friend. And what a stunning poem by Carol. I gasped at the last line.

And, finally, I want to hear the Sea Monkey poem--great title!

Thanks, Laura and Carol!