Happy back to school week to everyone. My daughter started high school on 8/26, but my son's senior year began this week. It's a perfect time to throw a Poetry Friday party.


Since I'm putting up the Host Post tonight, let's call this a poetry slumber party.

Whether you're the type who keeps everyone up until 2 am singing karaoke, the early riser who wakes the whole crew up at 6 am, or the kid who gets a good night's rest at home but shows up for pancakes in the morning, welcome! Please leave your link and a brief description of your Poetry Friday post in the comments. I'll be rounding up throughout the day.

We can't have a slumber party without some spooky stories, and I've got two to share with you. One is a novel. The other is a poem. Yes -- it's another "Chapter and Verse" pairing.

This is the eighth post in a series called "Summer Reads: Chapter and Verse." Guest bloggers and I are pairing books we've read this summer with a poem that complements the novel.

THE GIRLS AT THE KINGFISHER CLUB (Historical YA)
with Edna St. Vincent Millay's "First Fig"

STARGIRL (Contemporary YA)
with Eileen Spinelli's, "Poem for a Bully" and "Advice to Rapunzel"
Shared by guest blogger Janet Wong

THE IMPOSSIBLE KNIFE OF MEMORY (Contemporary YA)
with W.M. Rivera's "The You That's Left"

Pull up your sleeping bag and get ready for some spooky stories.

At the beginning of the summer, there was a lot of buzz about E. Lockhart's YA suspense novel WE WERE LIARS. It was my first juicy read of the season. (Check out the WE WERE LIARS tumblr.) 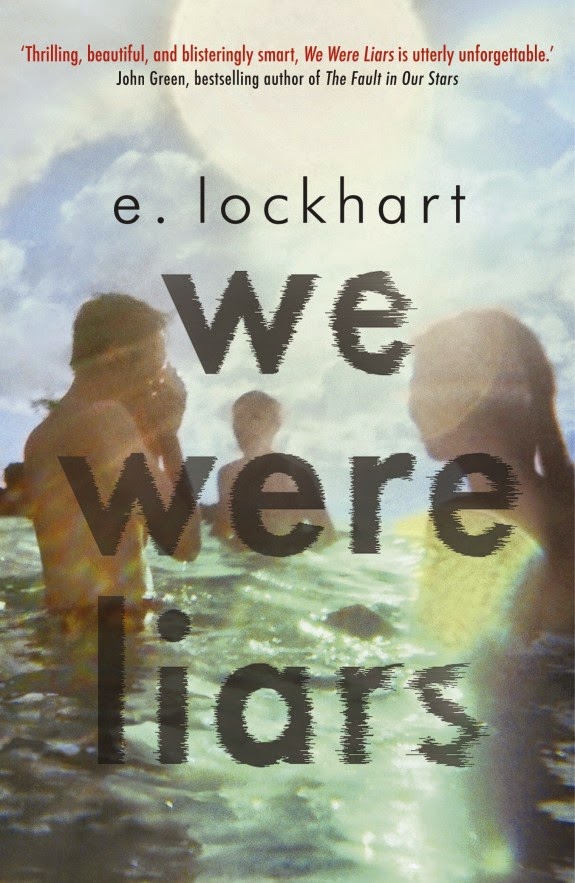 After two years away, Cadence returns to the private island where her Kennedy-esque family spends their summers. There, she's in the company of three generations of Sinclairs, a boatload of teenage cousins, and an outsider. Gat is not a Sinclair. He's not white. He's not rich. He is an extended-family hottie who is deliciously forbidden fruit for Cadence.

Cadence is trying to piece together what happened to her two years ago, when an undefined accident sent her to the emergency room with -- among other things -- a head injury and memory loss. No one on the island is talking, though. What Cadence ultimately learns about the accident, and her role in it, is a twist that readers won't see coming.

WE WERE LIARS is a fun read. Probably more fun for teens, who won't see a nod to a classic suspense movie, than for savvy adults or avid fans of thrillers. What I liked most about this novel was the tone. Cadence's voice was perfectly balanced between privileged and broken, making her a likable heroine. The setting -- imagine Martha's Vineyard owned and populated by one small family -- is filled with empty beach vistas that are both romantic and lonely. It's vast and claustrophobic, just right for an angst-ridden teen who is trying to piece her life back together.

Read a review of the novel from the New York Times.

My poetic partner for this novel is one of my favorites. It's a little thriller/mystery tucked into a surreal poem by the masterful Margaret Atwood. This one will play with your head.

This Is a Photograph of Me
by Margaret Atwood
Read the rest of the poem at Poets.Org

If you teach high schoolers, ask them whether they've read WE WERE LIARS. They have? Hand them this poem. I promise, they will want to talk about the art of suspense, and what makes a great twist in a narrative.

Do you have an idea for Summer Reads: Chapter and Verse? I'm still looking for guest bloggers. The series will continue until summer ends on Monday, September 22. For more information, find a full explanation of this series and a sample Chapter and Verse pairing at this post.

Poetry Friday bloggers, please leave your links in the comments. I promise not to jump out and scare you!

Tara Smith at A Teaching Life is getting to know her new students this week. She shares the beautiful poem, "A Happy Childhood," by William Matthews today.

At Random Noodling, Diane Mayr has another entry in her Sketchbook Project -- looking at working children from the early 1900s. The "Little Shaver" is selling a newspaper that's bigger than he is!

In honor of National Chicken Month, Diane is featuring "Poor Patriarch" by Susie Patlove at Kurious Kitty. The poem reminds me of a rooster whose name was Waylon Jennings (all his hens were named after country music singers).

Michelle Heidenrich Barnes continues her series of spotlight author bloggers with Irene Latham. They have an interview (Irene recommends reading in the bathtub) with lots of great insights into Irene's new book DEAR WANDERING WILDEBEEST. There's also a Ditty of the Month Club Challenge for inspiration. You'll find it all at Today's Little Ditty.

An original poem, "Riverwalk," is Becky Shillington's Poetry Friday offering at Tapestry of Words. This poem made me want to get outside for a riverside hike today.

Jama Rattigan's Alphabet Soup is a Mediterranean feast today. She has a tasty, sensory-rich prose poem from Diane DeCillis's book STRINGS ATTACHED, and a recipe for her grandmother's hummus.

The Poetry Friday summer poem swap was a great success, judging from everyone's posts about it these last few weeks. Let's take a second to cheer Tabatha for creating and organizing the swap. Hooray for Tabatha! At her blog, The Opposite of Indifference, Tabatha has the Ben Jonson poem "Drink to me only with thine eyes" sung by three different performers -- including Johnny Cash and Aretha Franklin.

Our first swap post is from Robyn Hood Black. She received a cinquain from Keri Collins Lewis. Keri's poem is a lovely nod to Robyn's big summer project -- moving house.

There's another poetry swap post at Jone's blog, Check It Out. Jone received a beautiful, summery Ode to Grass from Margaret Simon.

Matt Forrest Esenwine at Radio, Rhythm and Rhyme has been working at the state fair. He's got an adorable little "Black Sheep" poem, part of a series of original animal poems.

It's the first Poetry Friday in September. Karen Edmisten is celebrating with the poem "Absolute September" by (Baltimore local) Mary Jo Salter. The link is here.

But while it's September here, Douglas Florian reminds us that it's spring on the other side of the globe. In honor of Rio de Janeiro's rainy March weather, he has a "The Waters of Spring" by Antonio Carlos Jobim at the Florian Cafe. Follow the link at the cafe to hear a jazzy musical version of the poem performed on Youtube.

Many of us are sending love out to Linda Baie this week. It's been a year since her husband passed away. She says, "I have a sad post today, but needed to share a poem I wrote after my husband died one year ago. It's a special one to me, and I hope those who've felt loss will be touched by it." You'll find the poem at Teacher Dance.

The ladies at Gathering Books have been doing a powerful series on poems of conflict, with offerings from around the world. Myra is posting today, with a group of poems that includes Alice Walker's book "Overcoming Speechlessness: A Poet Encounters The Horror in Rwanda, Eastern Congo, and Palestine/Israel;" Naomi Shihab Nye's "Blood" and, Myra says, "the immensely powerful video clip of 'We Teach Life, Sir' by Rafeef Ziadah, a Canadian-Palestinian spoken word artist and activist. Thanks for helping to give voice to the children who are affected by war in their homelands, Myra.

Greg Pincus must have worn his footie pajamas to our Poetry Friday slumber party. He's got an original poem up today, "The Middle Toe Sets the Record Straight." (I'm guessing you don't want sausages with your pancakes, Greg.)

At Wee Words for Wee Ones, Bridget Magee is punning it up. It's been so hot this week, she has a poem about what happens in the desert: "When things get hot, bake cookies." Get it? Her poem features a clever momma, an overworked air conditioner, and a great solution for avoiding the oven on baking day.

There are more sweet treats at Irene Latham's blog, Live Your Poem. All Irene wanted was a DEAR WANDERING WILDEBEEST picture-cake for her book launch. What she ended up with is a cake fail. (Irene includes a link to an NPR piece on Emily Dickinson, baker.)

Slumber party guests, let's walk off those pancakes, cookies, and Irene's cake. Take a hike with Mary Lee. She has an original free verse about her 5:30 am walk at A Year of Reading.

Margaret Simon has an original poem based on two photographs of the beach and how they dialogue with one another. "Dialogue Poem" is at Reflections on the Teche.

There's another ocean-related poem at Teaching Authors, Laura Salas's last post for that blog. Laura says Lilian Moore's "Until I Saw the Sea" is "unsettling and melancholy." Sounds like another good pairing for WE WERE LIARS.

Ms. Yingling has been saying hello to her new students all this week, but she's also saying goodbye to her parents' home. Read her original poem about place and memory at Ms. Yingling Reads.

Those who love both fiction and poetry -- Holly Mueller has a great list of recommended MG and YA novels that include poetry. The list of novels is at Reading, Teaching, Learning.

The verse picture book IN THE WILD by David Elliott is Janet Squires' choice for this week's All About the Books. The book features beautiful, bright woodcut and watercolor illustrations by Holly Meade.

The poem for today at Bildungsroman is "Maud" by Alfred, Lord Tennyson. (A veteran English teacher I worked with years ago was still furious that the TV show "Maud" had ruined the name. She was a big fan of the poem.)

A LUCKY THING is the title of one of Ramona's favorite books, by Alice Schertle. She says it's "A great book to use in writer's workshop as you encourage students to closely observe the world around them." Check out the adorable cover of a mouse and a mouse at Pleasures from the Page.

Ruth poem today looks ahead to winter. It's "Lead" by Mary Oliver, at There Is No Such Thing as a God-forsaken Town.

Amy Ludwig Vanderwater is featuring another new book of children's poetry, Lee Bennett Hopkins' anthology, MANGER. She also has an original poem at The Poem Farm, about being the new kid -- something many of our students are coping with this week.

There are two Poetry Friday posts from Lorie Ann Grover: a haiku celebrating her 50th birthday at On Point. (Happy birthday, Lorie Ann!) It's called "Celebrating Fifty." She also has a book recommendation at Readertotz, the free verse picture book, Hello, I'm Johnny Cash (his second appearance at our Poetry Friday party).

More haiku -- it's a popular form this week -- from Carol Varsalona. She says, "My offering this week is a combination of an original haiku, Stillness and Serenity, for the upcoming Summer Serenity Gallery and a reflective poem by the 13th century mystic poet, Rumi." I like Carol's poetic reminder to stay grounded and make time for quiet reflection, even as the busy school year begins.

Let's end this party on a fun note. Joy at Poetry for Kids closes us out with two original riddle poems. That will give you something to think about as you  head home.

Thanks for visiting, everyone. I appreciate all of your contributions this Poetry Friday. It was a joy, as always, to read the posts and to participate in our wonderful community of poetry bloggers.
Author Amok at 9:00 PM