Everybody get your rain boots and brollies ready. We are going for a poem walk and it's going to be a wet one. 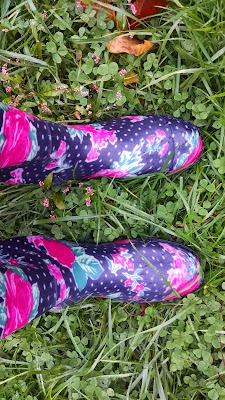 In my last post, I introduced the word and concept of onomatopoeia to the Manor Woods ES third graders. Today, let's jump into the second half of the lesson. The model poem I use for this lesson is Eve Merriam's "Weather." It's filled with onomatopoeia, rhyme, juicy and invented words.

We have already come up with a working definition of onomatopoeia. A list of sample words is on the board. Before I read the poem, I ask the students to listen for the onomatopoeia words, which we'll add to our list. Some of them are highlighted here.

A spatter a scatter a wet cat a clatter
A splatter a rumble outside.

The words in gray? I put those in jail (which makes the class hysterical) because they're not onomatopoeia words. We'll come back to these words in a minute.

Got your rain boots on? Now we'll walk through the poem carefully. Students take turn reading one stanza and describing what our mysterious person is up to.

We figure out that the person is inside, watching and listening to the rain on the window.

Has anything changed? Not yet. Still inside, watching the rain.

A spatter a scatter a wet cat a clatter A splatter a
A splatter a rumble outside.

This is the most challenging stanza for students to parse, but it's worth the effort. Here are the dots we have to connect: The person in the poem sees a cat outside. Is the cat just sitting peacefully in the rain? No -- it scatters and clatters. But why? We realize that "rumble" is the sound of thunder. Oh, we get it! The cat heard the thunder, it was afraid, and ran away in a clatter.

Our residency is often one of the students' first experiences with close reading. Once they realize how good they are at finding meaning, they become champions at this skill.

Why does the author repeat "umbrella" four times? To make it clear that our person is heading out into the rain. Let's grab that word bumbershoot out of jail. I thought it was a made up word. A parent finally told me that it is a British slang term for umbrella. (Next time it rains, put on your best British accent and ask whether you may take the bumbershoot to school.)

Let's get those galoshes out of jail. At least one person in the class usually knows what galoshes are. We can see that our person has galoshes on, and is splashing around in the rain.

Now he or she is jumping in puddles.

Last, we talk about the invented word "pudmuddle." Sliding in mud puddles sounds like a great way to spend a rainy day, don't you think?

When it's time to write, some of my students like the idea of creating an onomatopoeia riddle poem. The prompt is to describe a place or activity using mostly sounds. Will the class be able to guess what's happening in the poem? Let's read some third grade onomatopoeia poems and find out.

Stomp giggle
I see the way
clippity clop
to the
pop crunch bunch
tons of lunch
boom pow
I see you
talk and walk to my
pow eat
crunch crunch
yum yum
thank you very much.

The Lunch Room
by Brandon Li

A rumble, a grumble, a mumble.
We sit at a table and dine.

A chit, a chat, or something like that.
We talk about stuff as we gulp our food.

A splish, a splash, and there goes milk.
The janitor comes and dries it.

A teacher, a speaker,
they say to line up to class.

They throw, they go,
and they go to the class.

Now the eating is done
and we go to math class.

Thump each time I come down.
A squeeze to make her go.
Pad, pad. I walk into the tack room.
Click, clack go her feet.
Swoosh. I swipe the brush.
Tap, tap! I go with the crop.
The sun is shining, a beautiful day.
I feel very confident to ride.

I'm on the beam.
I hear a soft thump
as I walk on it slowly
with my arms out. I'm ready.
I put my hands down.
Suddenly, I'm upside down.
My friends say, "Arms straight."
With a big giant thump
I'm on my feet again.
I jump off and a swoosh
when I put my hands out.
I can hear the floor creak
as I walk to do the finale.
I'm upside down
over and over again.
I can't stop.
Then everybody hears
a big boom when I slam
my feet to the ground.

Whistle, kick, a slide, a foul, free kick.
The sound of the game starting.

Whoosh, cheering, tense excitement.
The sound of the game.

All of a sudden, the field is quiet.

I love the moment in Srikar’s poem where it gets quiet for just a moment at the end of the game.

My appreciation goes out, again, to the families, teachers, and PTA at Manor Woods Elementary School. I'm having a great time working with the students. Aren't their poems impressive? Thank you for allowing me to share your students' poems online.

For Poetry Friday, I'll have some third grade opposite poems to share.
Posted by Author Amok at 5:38 PM

Days like these I just want to hug our language and how much fun it can be. Love these sound poems. Great activity for young ones like mine!

Ditto what Margaret said - I love the English language! It's so dynamic and allows us so much room to play. Your students clearly had a blast with these poems. The results are impressive!