It’s Day 22 of Author Amok's 2015 poem-a-day project. We are spending February writing in response to sounds.

For a full description of the project and how to participate, please read this post. I hope you'll join us. I'll continue posting poems from Day 22 as they come in. Thanks to everyone who has sent in poems so far.

I apologize for today's sound. When I took suggestions and chose the sounds a month ago, I had no idea central Maryland would get a foot of snow and ice on 2/21/15, just in time for my birthday. Before we begin, have a slice of cake. You need to build up your strength before we head outside.

Our Day 22 prompt is footsteps in snow.

Patricia VanAmburg has been playing in the snow with her granddaughter.

The steady beat of the footsteps reminded me of a heartbeat's rhythm.

Many of us get nostalgic for the winters of our childhoods when it snows -- perhaps even more so when it doesn't. Mike Ratcliffe's poem remembers the deep snows of childhood.

Galoshes over plastic bags over shoes,
we crunch through the snow,
pull our sleds up the street,
candles in pockets to wax runners
so we could fly back down.
Throw snow balls at the plow
as it ruins our course,
run into the woods
when the driver stops.
Stomp down the snow,
make a new run--
watch out for trees,
turn fast at the creek.
Spend the whole day outside,
only go in when our mothers call.
Fingers and toes tingle and sting.
Hot chocolate after warm bath.
Hope that the snow doesn’t melt away.

Look at the way Margaret Simon breaks the lines in this poem to mimic the caution we feel when stepping on slippery, icy ground.

Walking in the snow,
I take it slow
Step,
step,
slide

splay my arms wide
Flakes swirl in the air
land on my tongue,
my nose,
my hair

makes the world solid white
facsimile of purity—
that’s why
I step
light. 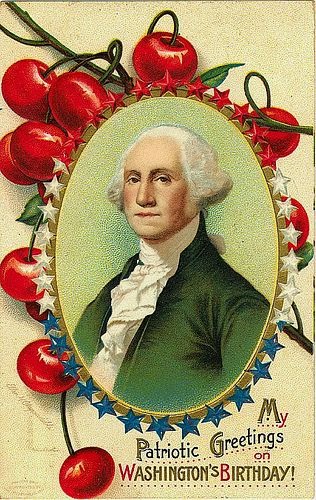 Linda Baie's poem is connected to Washington and winter.

She writes "On Poetry Friday, the 20th, one blogger shared how the tough winter in the east would help students understand the plight of General Washington and his troops at Valley Forge. He jokingly wrote that students in San Diego would only be able to imagine that plight. When I heard those crunching footsteps, my thoughts went immediately to Washington’s army. The facts say about 12,000 were there and about a third of them died of cold and starvation."

A Thought for Valley Forge

Soldier, soldier, marching onward,
the cold and snow - unjust reward.
Bundled rags your only dress,
yet Patriot, on you must press,
in hunger, frozen at the core,
ever feeling at death’s door.
Do not forsake the cause you’ve taken.
We’re thankful that you have forsaken
your comfort for our freedom saved.
Those February days were grave;
we grieve your fight of long ago,
those crunching footsteps in the snow

Charles Waters is also thinking of those who suffer in the cold, often unnoticed.

I like how Diane Mayr captures the meditative quiet of a walk in the snow. If you got outside just after sunset on a very cold Friday night, you may have seen Venus and Mars clustering around a crescent moon, low in the sky.

A patent leather sky,
every star a cliche.
No wind.
No one.
Only the squeak
of subzero snow
and the clarity
of my thoughts.

So much to like here! I would have to say, though, that Linda has grabbed me with her contemplation of Washington and his long-suffering troops. And, she did it in rhyme!

Since I grew up in northern NJ and remember big snows from childhood, Mike Ratcliffe's poem also spoke to me today.

So glad to hear my poem spoke to you, Laura. I still love a good snow and getting out in it.

Thank you, Diane. Again, all the poems speak to special connections. Charles, I tried a poem about the homeless too for I think of them all these awful winter nights. Patricia, I was out in the snow last weekend with my granddaughter (5), love your capturing of that time. Laura, the word 'static' says it just right-waiting... Mike, I'm old enough that we also used the plastic bags, and wore pajamas for long underwear. I don't remember being cold! And Margaret, I'm not sure I should send it, but a friend here in town just fell & broke her wrist, out shoveling. Perhaps she should have read your poem first! Diane, I go out each night for a minute to see Orion's Belt-quite beautiful. Your poem reminds me that cold and stars are not bad things at all. Thanks All, and for that piece of cake, too, Laura. Hope your birthday was warm and wonderful despite the cold.

What a splendid array of poems! I liked them all. Charles' and Linda's were both moving in their own ways.

A moving memory in every poem. My son just reminded me of the bread bags under leaky boots Mike. Thanks all for helping me get through the snow...
Patricia