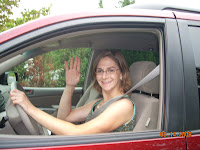 so much depends upon a red mini van filled with women who publish children’s books A few weeks ago, my straight-off-the-lot Toyota Sienna had some unusual passengers. I’d volunteered to chauffeur a carload of children’s lit agents, editors and authors to the airport/train station near my house. They were in Maryland for our regional SCBWI (http://www.scbwi.org/) conference. In the back, where my kids usually sit: Linda Pratt of Sheldon Fogelman Agency, Martha Mihalick of Greenwillow, and Aimee Friedman – Scholastic editor and YA author. Riding shotgun, none other than Newbery Honor winner Cynthia Lord. Wow. I listened to their shoptalk. Chimed in about hot titles and favorite reads in children’s books. But the most fascinating topic that came up is what I am calling literary cross-dressing. The conversation began with Kevin Henkes. The picture book author is also an award-winning children’s novelist (not to mention a hottie, according to my passengers). I loved his Newbery Honor winner Olive’s Ocean. The book is told in third person, but the limited omniscient narrator sticks to the thoughts and experiences of adolescent Martha Boyle. The voice is so true to girlhood that Aimee Friedman said her reaction to the book was, “How did Kevin Henkes get inside my head?” I wish I had written down the lengthy list of male authors who the experts in my car said write great female protagonists. However, when I asked about women who write well in boys’ voices, it was quiet enough to hear my van’s brand-new engine humming. “J.K. Rowling,” someone offered. Lots of agreement. Then…not much else. “Why is that?” I asked, realizing that the novel and two picture books I’ve been shopping around all feature boys. The conversation stuck with me. Why do so few women write in boys’ voices? Is it that hard to do?

Maybe you’re like me – growing up with sibs of the opposite sex. I did not realize until I was an adult and an author how fascinated I’d been with my brothers, how deeply I remember their adventures and quirks and mishaps. Probably because they were so strangely different from me. (You'd never catch me with a pair of y-fronts on my head, pummeling my brother in a mock pro-wrestling match.) Some cross-dressed reading to check out, in addition to Olive’s Ocean: Phillip Pullman’s His Dark Materials trilogy is third person omniscient, but pre-adolescent Lyra is the central character in the story; Nancy Springer’s realistic YA novel, Toughing It; Wendelin Van Draanen’s middle grade novel, Flipped, alternates between the female and male first person narrators; William Carlos William’s poem, “The Widow’s Lament in Springtime,” is one of my favorites -- the speaker of the poem is a woman; classics like Anna Karenina and Madame Bovary. Love, Stargirl, by Jerry Spinelli. To my mind, Stargirl was a better read because the male narrator guided the reader as he tried to understand Stargirl. If you think of more good reads, send a comment. Or maybe you know of a book where literary cross-dressing does not work – a male author just couldn’t pull off that female voice (or vice versa).