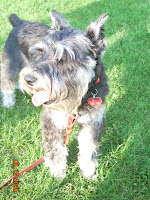 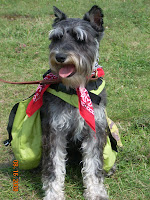 Samwise McBark-Bark, who thinks he is the Sir Lancelot of our household.

Writers & teachers read a lot. It's a job perk (or hazard, according to Mr. Amok).

With all those storylines, characters, settings, crises floating around in our consciousness, we're prone to making literary allusions.

We named the new pup (who came from Schnauzer Rescue http://www.schnauzerrescue.net/) Samwise, hoping he'd be a true and noble friend like Frodo's Sam in LOTR.

I've been reading Kevin Crossley-Holland's wonderful Arthur trilogy -- it begins with "The Seeing Stone" -- and have noticed that Sam answers to his name, but has a secret identity (not unlike T.S. Eliot's cats http://www.dentonbach.com/poems/7.htm). He thinks he is Sir Lancelot. Protector of the weak, e.g. anyone who's come in the house and gotten his okay. Barker at invaders, e.g. anyone walking within 50 feet of our house.

He's our first literary dog. He came to us as Sammy -- we added the allusion. I've known a MacDuff (dog), Atticus Finch (cat), for goodness sake, Demi Moore has a daughter name Scout.

Are you addicted to allusions? Do you find allusion-dropping funny, cute, clever, or literarily obnoxious?

Look for a post about my family outing article at Baltimore's Child magazine this month (it should be up soon at http://www.baltimoreschild.com/). My kids immediately dubbed the marshes at Calvert Cliffs State Park in Lusby, MD: The Marshes of Morda. They couldn't help it. We'd just finished reading the entire Chronicles of Prydain.

Whoops, I did it again.