Amok Behind the Scenes at the Dodge Festival II

AA: Tell us about some of the poets you’ve met. I’m interested in authors whose personalities “fit” what we see in their poetry – either its tone or subject matter. Maybe people who don’t fit their poetic personas would be more interesting. You decide! 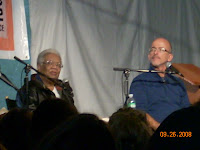 MZM: Meeting poets after you know their work is always intriguing because you never know what you are going to get. Mark Doty (pictured right at a 2008 Dodge Festival panel) exudes the intelligence and humanity of his work, but his surprise is a drollness I do not see in his work. Edward Hirsch is surprisingly hysterical. He totally caught me off guard. Gerald Stern [AA: one of my favorites] still has the energy of a 20-year-old.

Lucille Clifton (pictured left) [AA: a Howard County, MD local and another fave], the only poet to attend every single Festival, is a total charmer. After meeting her, I was better able to see the sly humor in her work. All of these poets relate to the high schoolers as though they were old buddies. AA: The Dodge Poetry Festival has been compared to a rock concert or music festival. What is it about Dodge that invites the comparison? 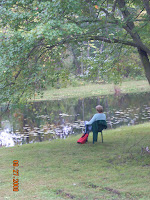 MZM: The beautiful outdoor setting is certainly one contributing factor. And there is music throughout the festival which comes as a surprise to many people.

A concert is a focused event because attendees are, for the most part, fans of the musicians. It is no different for poetry. Those who avoid it, and suffer for the loss, don’t attend. Those who love the stuff, come to hear the stuff, and they know that every other person they pass on the winding trails to various performance spaces also loves the stuff. It does a body good. In addition to being a Festival Assistant for Dodge and a communications professor at New Jersey's Union County College, Michael is a wonderful poet. He’s sharing a recent narrative poem about a childhood experience. The title says it all…but look for Michael’s use of detail to anchor us in elementary school. SHOW ‘N TELL DISASTER By Michael Z Murphy

My hands held the smell of death One shouldn’t do what one shouldn’t do They were robin’s eggs in the nest Prettier and smaller than the pictures The color as delightful as Lady’s Collar and leash—robin’s egg blue Patent leather with rhinestones Not so many though as to be tasteless I held one up to the light Still it was opaque As I turned it between Thumb and forefinger A sickening sounds and goo This death burned me I replaced the disaster I returned to my seat I do not like the smell of death No amount of finger rubbing on creased School pants could rub out death’s smell Enough so my chest would not seem to crack I could not hear about borrowing From the tens column--the merry semicolon Never existed—Johnny Tremaine moved on Without me—the boy with death on his fingers Cramping began at once Within the hour I leaned over And barfed cheerios and milk All over creation Children slide back Mr. Wilson said without missing a beat Young Man, to the boys’ room fast Fred, here is a pass—ask Mr. Byrd To please come here quickly I returned to class ashen and still

Stinking of death so strongly That even Mr. Byrd’s pine mop water Could not overwhelm death’s perfume As he walked out Mr. Wilson asked What else happens on Friday I knew the answer: Friday is when I murder 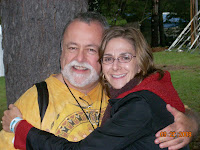 Michael Z Murphy, thanks for visiting! I'll say goodbye with a virtual hug.
Posted by Author Amok at 11:22 AM