Out yesterday with a migraine. Taking it easy today on Yom Kippur, the Day of Atonement.

Which got me thinking about Ian McEwan’s novel “Atonement.” In Part One, the Tallis’s mother is a migraine sufferer. The detailed description of her heightened senses, her guilt over being incapacitated, rang horribly familiar. I couldn’t get through “Atonement.” Stopped on page 143. It’s rare for me to put a book down, but I could only take so much of bored rich Brits under an emotional microscope. Pages and pages of, “It’s so hot, whatever shall I tell Cook to make for dinner?” More pages and pages of Cecelia Tallis agonizing over which gown to wear. Pass me the Jane Austen. At least she viewed people like this with a grain of salty sarcasm. The migraine wasn’t the only thing that caught my interest, though. The novel has a terrific sex scene – brutal, honest, romantic because of its lack of romantic clichés. Which is why I was surprised to see “Atonement” on Teenreads.com’s Ultimate Teen Reading List. (Terrific resource, BTW, for YA authors.) This is language and description appropriate only for upper teens (we’re talking legal adult age), but the list doesn’t differentiate between middle schoolers and voting adults. Is it possible that “Atonement” is on the list because of Keira Knightley’s popularity with teens? She starred as Cecelia in the movie version (I haven’t seen it) and appears on the cover of some editions. The book was not marketed for a teen audience. The event that transforms the characters in “Atonement” – the turning point that makes these characters interesting, maybe even deserving of microscopic treatment – happens mid-way through the novel, about page 175 in my paperback. Beginning novelists are often told, "Start with chapter two." Well. I peeked ahead. Part Two of the book looks like less of a slog. The characters really are transformed by that major turning point on page 175. There are shades of Kurt Vonnegut’s “Slaughterhouse Five” in the war scenes. Lots to like, but I hit a roadblock. 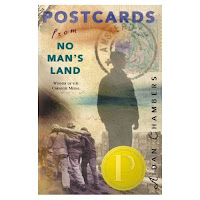 A more readable book, Aidan Chambers “Postcards from No Man’s Land.” This Printz Award winner has many of the same themes as “Atonement”: war, the power of secrets, first discovery of love. Highly recommended. For older kids, read it as a companion to “The Diary of Anne Frank,” which plays an important role in the novel. There's an article about "Postcards from No Man's Land" here: http://www.accessmylibrary.com/coms2/summary_0286-25339102_ITM Have you read “Atonement” or seen the movie? Tell us what you thought.
Posted by Author Amok at 8:22 AM

Laura, hi there! Your first post is up on GwG, have a peek! Also, I hate to say it, I was bored by the book and strayed before finishing... maybe I shouldn't admit that! : )

Hey, Susan.
Wow. Thanks. I was so impressed with your Katherine Paterson interview. Jacob Have I Loved -- I must have read it ten times.

You're in good company regarding Atonement. Beautiful language. Lots and lots and lots of it.