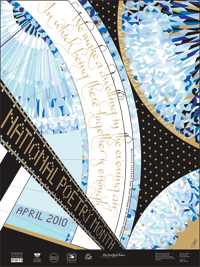 My ten-year-old daughter explained to her friends that we put the poster up with great ceremony each April. At first they wondered what all the fuss was about and -- "It's free? Is that just if you're a poet?"

They voted the NPM poster as "cool." No surprise, image on this year's poster is eye-catching. 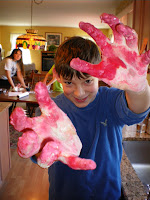 My kids were tracking monsters today with the help of fantasy author A.R. Rotruck, so I loved this weird Rhode Island vampire story. Mercy Brown of Exeter, Rhode Island died in 1892, but was exhumed to try to save her brother from a family curse. Read on to find out what happened next.

On the tour, I love finding poems that give a sense of the region we are visiting. Starr captures The Ocean State in this poem. If you've ever lived near an ocean, you'll recognize the pull she feels here. 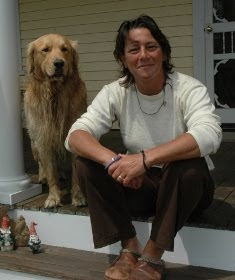 
I went back to the sandpipers today--

it's been a while.

Six of them, or

was it twenty? Never matters;

somehow we all know when a meeting has been called,

somehow we all know

exactly when the surf

will start tossing back

One time I was astonished

to find them waiting for me on the beach in Newport.

I wasn't planning it

my car just brought me there,

a most uncommon thing-- it's not that kind of car--

but there we were, alone on a beach.

It almost made me giddy,

I'd forgotten how much

Click to read the rest of the poem and others by Starr.

Tomorrow, I will take you to Vermont. This time, we're calling the Ben and Jerry's factory first before we show up for a tour. Because I can't handle that kind of disappointment twice in one lifetime.