It's the Sweet Sixteen post of our National Poetry Mont 50 State Tour. Pucker up, I'm spinning the bottle and the lucky state is...

Tennessee. The guitar on your state quarter is so cool! How long have you been a musician? 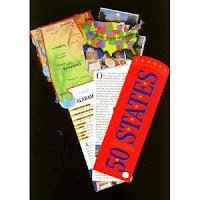 Tennessee became the 16th state on June 1, 1796. I love it's nickname, The Volunteer State. My 50 State Fandex tells me it is the country's largest producer of Bibles.

It has an interesting Civil War history (on my mind because of Virginia's kerfluffle over Confederate History Month). Because portions of the state were pro-Union and anti-slavery, Tennessee was the last state to join the Confederacy and the first to rejoin the Union.

According to Fandex, it's also "the only Southern state ever to free the slaves by popular vote."

Tennesee's poet laureate, Margaret Britton Vaughn, has held the position since 1995. It is a lifetime post.

Britton Vaughn wrote "Who We Are" for Tennessee's Bicentennial. It's a rich list poem. I love details like "Wilma Rudolph's run for the gold."

Ohio would be our next stop, but it's a Wall of Shame state -- no poet laureate. If poet Rita Dove invites us over, maybe we'll make a pit stop.
Posted by Author Amok at 8:57 PM