Author/illustrator Christy Hale is visiting! I met Christy at a regional SCBWI conference this spring. As a poet who writes about art, I was fascinated with her book The East West House: Noguchi's Childhood in Japan, about the early life of sculptor Isamu Noguchi.

Christy and I began a discussion about the similarities between poetry and art. I'm thrilled to be continuing that conversation and sharing it with the Poetry Friday gang.

Thanks for being here, Christy. Did you read poetry as a child? What were some favorites?


As a big sister, it was my job to read to my little brothers every night before bedtime. I memorized countless Mother Goose rhymes and poems by Robert Louis Stevenson, Edward Lear, Christina Rossetti and many other children's poets. I still know many of these poems by heart.
I love the phrase "by heart" which speaks both of the pulse of poetry as well as the place we receive those rhythms -- deep in the heart.
It's funny you mentioned that phrase. My 10-year-old just memorized the poem "Jabberwocky" and was asking why we say "I know that poem by heart."

Your book The East West House: Noguchi's Childhood in Japan (Lee & Low, 2009) has been called lyrical, even though it's not, strictly, poetry. Why was it important that the story of the artist's early life have a poetic feel?


Isamu Noguchi was the son of a Japanese poet. Yonejiro Noguchi met Leonie Gilmour, a Scotch-Irish American editor and teacher in New York. She helped Yone publish his poems in English.
The two worked well together and a romance developed. They never married, and Yone returned to Japan in the spring of 1904, even though Leonie was expecting their child.  They continued to correspond, and Leonie and baby journeyed to Japan to join Yone in March of 1907. This is where my story begins.
Isamu's early childhood was spent in Japan, exploring temples and gardens, encountering art everywhere, as part of his everyday environment. Isamu developed a love of natural materials, simplicity in form, tools and craftsmanship.
Those sound like qualities shared by many poets.
In his early twenties, after completing a traditional academic sculptural training in New York City, Isamu Noguchi visited a gallery and saw "Bird in Space" by Constantin Brancusi.

An elegant ellipse suggested a bird in flight. The elimination of details and the distillation of form to essence seemed like Japanese poetry to Noguchi. The encounter triggered his conversion to abstraction.
He then applied for a Guggenheim Fellowship and stated his goal as interpreting the East to the West through sculpture, as his poet father had done with words.

Noguchi's sculpture is visual poetry inspired by his heritage, youth in Japan, and modernism.
I chose spare, lyrical language because I wanted to leave space for the reader to participate.
In high school and college I took all the art history classes available. My tastes evolved from a preference for realism (where more is presented and less is required from the viewer) to an appreciation of abstraction (where the viewer has to work harder and engage more fully to understand the work). Poetry seems like abstraction. The reader is active in a different way than when reading prose.
I've never heard abstract art explained in terms of what the viewer brings. That makes so much sense!

Christy, I love the page in East West House that reads, "Now father had another family. His home was not their harbor. Outside, a bamboo flute cried through barren trees and a chilly wind scattered leaves." 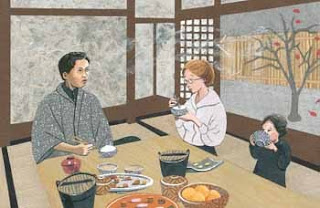 You don't explain the image of the flute, but trust young readers to sense Isamu's loneliness. Why?


Thank you. While researching, I discovered Yone Noguchi wrote an article for The Nation about Isamu's arrival in Japan. He described a bamboo flute playing on the street the first night. This lonely, shrill sound actually was part of young Isamu's experience.

Many years later, in his autobiography, Isamu wrote, "My earliest recollections are of a house in Tokyo where we arrived, myself aged two, from America, my mother a stranger. The house belonged to my father... In the garden were two large cherry trees, and surrounding it  was a high bamboo fence... The cherry blossoms came and then the wind that scattered them over the ground, so sadly."
Wafting notes and drifting leaves evoked transience for me, as I hoped they would for my young readers.
I think this is where I come closest to haiku (in content anyway). Leonie and Isamu's lives become those of wandering outsider, gaijin, when they realized that Yone had another new family. After their long sea voyage, they still could not harbor.
Those lines did remind me of haiku. The imagery itself evokes the emotion.

I'll post the rest of my conversation with Christy Hale later today. She'll tell us about illustrating a collection of May Swenson's poetry, and about her latest children's book. Meanwhile, check out her website: www.christyhale.com.

Thank you for the interview and showing a book I missed but now want to read. That bamboo flute is sad and beautiful. I look forward to part two!

Jeannine, you will love the book. It speaks to the early experiences that form an artist's point of view.

Love, love this post. I've been wanting to see this book, and hearing more about it has whetted my appetite even more. The art looks gorgeous!

Jama -- you're in for a treat. The art is amazingly tactile. It's hard to believe you're looking at a 2-dimensional page because of all the textural effects Christy gets. Which, of course, suits her sculptor subject beautifully.

I enjoyed Ms. Hale's workshop at the conference, and your conversation with her is lovely, Laura! I saved May Swenson's "Question" just yesterday, so I could read it again. Looking forward to the rest of your conversation!

"The Complete Poems to Solve" is a wonderful book to share with older children -- I'd say middle school and up.

I'm so glad you posted this interview with Christy! She is lyrical with both her words and her art, and this book is a new favorite of mine.

Nice to hear from you, Edie! As I told Christy, my parents lived in Thailand for a while. Until I was five, we had two Thai brothers living with us while they attended American schools. The bi-cultural aspects of the book speak to me because that's what I saw growing up.

Wonderful to get this opportunity to e-meet all of you. Thanks for the kind words about the book(s).