Stand up for Girls

Today is the International Day of the Girl.

According to the website LitWorld, 2/3 of the world's illiterate population are women. Wherever you are at noon today, stand up for ten seconds. LitWorld -- a global literacy nonprofit -- will be posting photos of people standing up for girls at their website. 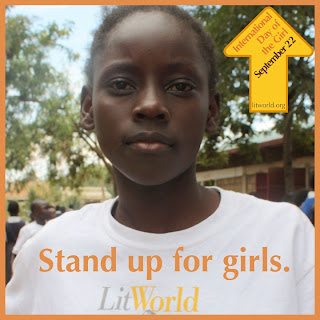 For the last two weeks, my daughter and I have been talking about girlhood and awesomeness. I've been following the blog Redefine Girly, which has been tackling some interesting issues that U.S. girls face, from back-to-school t-shirts that promote the idea that being pretty means playing dumb, to the television show Toddlers & Tiaras.

My kid is new to middle school, and she's facing some of those issues. This morning, she told me that -- despite anti-bullying training at school -- her outfit got a disapproving once-over from a girl who "thinks she's popular or whatever."

She said, "Mom, talking about 'Waking up Full of Awesome' really helped me."

The two of us posted about some of our favorite books featuring girls who hold tight to their own sense of awesomeness. Today, I'm adding YA titles to that list. Miss J is too young to read most of these books. I'm glad she'll have some great characters to show her how to stay awesome when she heads to high school.

Parents -- these books put the "adult" in young adult. Make sure you know what your kid is ready for before handing her one of these books.

An Abundance of Katherines by John Green

Colin, a genius high schooler, strikes out on an adventure and finds down-on-her luck Lindsey. The story is too full of quirky details to summarize here. Among a list of love interests named Katherine, Lindsey is like a not-Heather in the movie Heathers. She's unapologetically different. That's why I think she's awesome (and Colin comes around to sharing that POV.) 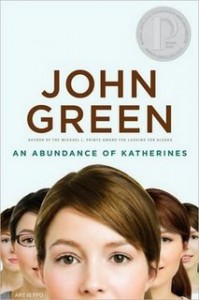 Side note -- my teenage son loved Green's Looking for Alaska. He would not touch Katherines. Maybe he could have gotten past the girl-centric title, but the cover was too much for a boy reader. I hope it comes out with a new design soon. 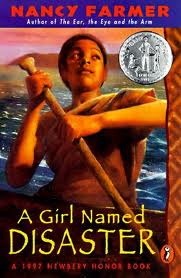 Nhamo runs away from her village in Mozambique. Not only does no one recognize she's an awesome kid, but she's in danger of losing her inner-fire as the child bride of an older man. Nhamo's harrowing journey tests her resources, but also leads her to a new life. Taken under the wing of a female scientist, Nhamo gains access to education and thrives.

The more I thought about this novel, the more important I realized it was. It's not a comfortable read for a parent. At a party, someone snaps a cell phone photo of high schooler Audrey Porter performing a sex act. The photo gets around school, is sent to her parents -- worst case scenario. The book focuses on how Audrey questions her self-view. Is she still a good kid after what happened? What does that even mean? Audrey re-invents herself, makes some new friends (kids she had previously labeled as "bad girls")  and finds her way back to that inner sense of awesome.

Graceling by Kristin Cashore
In this fantasy novel, some people have a "grace" -- a special ability. Katsa's is her ability to kill, or so everyone thinks. The story follows Katsa as she handles political intrigue and assassination attempts without losing sight of who she is. She never plays along or does what she's told. Obedience isn't on her menu. Eventually, Katsa learns to redefine her grace and see herself as more than a killing machine.

This book met the boy seal-of-approval at our house. If your son liked The Hunger Games, he will love Graceling. My guy also liked Fire, a novel set in the same world.

Miss J and I discussed this one at length. We are not going with the obvious choice, Hermione Granger. While Hermione never apologizes for being smart, we both think she's too judgmental of others to be on our list.

The honor goes to Ginny Weasley. In the first three books, Ginny's crush on Harry Potter makes her goofy, shy, and leads to her victimization. In the later books, though, Ginny learns to be herself around Harry. It turns out she's a fabulous Quidditch player (who wouldn't be with six older brothers) and has a mean bat-bogey hex. Ginny is tough. She doesn't let others tell her who she is or should be. We both liked that Ginny realizes the only guy worth dating is a guy who likes you for who you are.

I avoided reading this fantasy novel for a long time. What parent wants to read about kids fighting to the death on TV? Finally, I gave it a chance. So did everyone else in the world.

What makes Katniss Everdeen so appealing? She's tough. She stands up for herself, feeds and protects her family. She's smarter than the politicians who want to manipulate her for their own purposes. I liked that she didn't give in to the excesses of "The Capitol" -- where everything is about appearance and consumption. In this future, people matter only for their usefulness to the government. Katniss shows that one independent spirit can change the world.


Stargirl captures the heart of Leo BorlockStargirl's uniqueness. But it doesn't last long. The pressure to conform is too great and Stargirl is anything but a conformist. If you've read the "Waking Up Full of Awesome" post -- I think Stargirl has never lost the wild and wonderful sense of self we see in five-year-old girls. I am sorry to say that this list is short on awesome girls of diverse backgrounds. That's more about what's on my bookshelf, unfortunately, than what books are available. If you have an awesome YA heroine to recommend -- no matter what heritage -- please let us know about her in the comments.

Stand up for girls today!
Posted by Author Amok at 11:31 AM