Knocking at the Door of Reality

"You knock at the door of reality,
shake your thought-wings, loosen
your shoulders,
and open."
I shared Rumi's poem, "The Gift of Water," on Saturday. It is the source for the above quote.
I was feeling stuck in my writing. The poem made me feel more trusting, as if I could push through that door and find the open place where poems come from.
So...here's a story that you may find weird, or familiar, about being open.
Last night I had a dream about my favorite NYU professor. Playwright Stuart Browne taught our "Craft" class at Tisch School of the Arts' Dramatic Writing Program. For him, the students at DWP weren't a bus stop on the way to his next screenplay or book deal. He was a real deal educator, as well as being a gifted writer.
About a year ago, I learned that Stuart died young -- just before the publication of his first novel. The novel was a success in his native Britain, where it was made into a movie. I bought and read the book. It is a fictionalized memoir about a film-maker/ long-time alcoholic who, in early middle age, falls in love, struggles to get clean, and winds up with cancer. It's hysterically funny. It's also, whether you knew the author or not, very sad.
Last night, I had a dream about Stuart Browne. He insisted that he was not dead. Reports of his death -- especially on the sleeve of his book -- were obviously false. I filled him in on my literary life since 1991, when I graduated with a BFA.
As I was waking up, I felt as if this was more than a dream. My old prof was hanging around for a reason. I made a mental bargain with him. This worked for me once before, but that's another story.
I told Stuart, "If it's really you, I need proof. Send me a candy-apple red toy car. If I see that car today, I'll know you're around."
Cut to Sunday afternoon. I have dropped my son off to do volunteer work at his high school. I am heading home after running some errands. I reverse out of a parking lot and see two red cars behind me. No deal. They are not toy cars. Only one of them is the right color red.

Then, something catches my eye. Behind the shopping center, by the dumpsters. Instead of driving through the parking lot, I pull behind the building.

Propped against a dumpster is one of those shopping carts with a red and yellow truck on the front, the kind kids sit in to make grocery shopping fun and keep them contained while the adults shop. The cart is upside down, with the truck pointing to the sky, as if it had been driven into the dumpster and parked nose-up. It's not a red toy car. Not really what I had in mind. 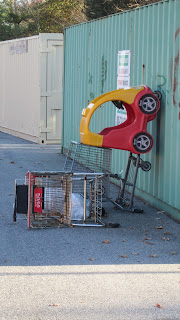 It wasn't until I got home and started telling my husband this story that it hit me. I started to laugh. I'd momentarily forgotten the title of Stuart's novel, Dangerous Parking. 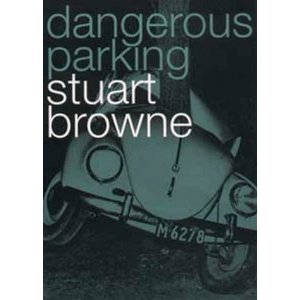 When I told him the story, my teen asked, "Would it be like your professor to rib you?" Yes.

Strange things happen when you knock at the door of reality and open. It's nice to believe that my old mentor is cheer-leading from beyond. He'd get a kick out of that image -- spiritual pom-poms.
Posted by Author Amok at 2:32 AM

Oh, Laura. This was totally worth the wait. Goosebumps and giggles--"Dangerous Parking" indeed! Thanks for sharing.

PS: The word I have to type to verify I'm a person is "plotess." Sounds like a combination of "plot" and "godess." I like it.

That is some dangerous parking!

I'm so sorry that Stuart Browne died so young. Glad that he continues to have a presence, both for you personally and artistically, in the form of his book and movie.

Erin, I'm so glad you liked it, Miss Plotess!

Hi, Tabatha. "A presence" is a good phrase for it. I do see a connection with the Rumi poem. Wonderful that you do, also. (Thanks for lunch, BTW!)

I teach shamanic dreamwork, especially to writers, and one of the things I know from personal experience is that yes, those who have died come back to visit us in our dreams.

You got confirmation big time. Now, if your dream were my dream, I'd believe that he'd come to get me writing, and to help me with it. I'd re-enter the dream (which we can do) and I'd ask him how to reconnect regularly. And I'd thank him for the great chuckle. :)

Paula -- that was exactly the message I received. Thanks for the comment.