30 Habits of Highly Effective Poets #21: William Stafford on Being the Early Bard 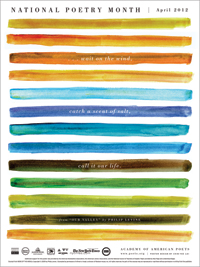 I'm just a little obsessed with the poetry of William Stafford. When I learned that the great American poet rose daily around 4 AM to write, I decided to try it myself.

The first few days went great. My night-owl family did their best to understand that I'd be going to bed EARLY. But people needed help with homework and stuff. I started needing afternoon naps. The naps got longer. 4:00 AM became 4:45 AM. The snooze button was my frenemy. But on the days that I got up early, I did write.

I discovered that I am a morning person, not a true early bard.

While Stafford's routine didn't work for me, there are many writers who are at their best in the pre-dawn hours. They like the quiet space of being the only awake person in the house. Stafford says, at this time of day, he felt available to "catch" the poems. There's a connection here with Betsy Franco's "Bed Head" post -- using the space between sleep and wakefulness, where the mind is still uncluttered and open to ideas.

In addition to William Stafford, Cynthia Lord (Rules) has told me that she is an early bard. Reportedly, so is novelist Manil Suri.

If you'd like to know more about Stafford's early-hours writing habit, check out my recent post on the poet.

Over the years, I have been working on a series of poems -- each in response to a piece in Stafford's collection, The Darkness around Us Is Deep. 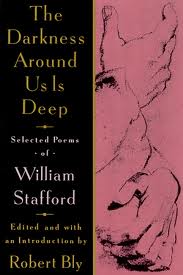 My early poem, "Driving Home from the Poetry Festival, 1996" was written long before I started the series. However, a friend pointed out that this poem resonates with Stafford's well-known "Traveling through the Dark."

Here are both poems:

Driving Home from the Poetry Festival, 1996
by Laura Shovan

I would like to remember this night,
compel my mind to hoard sounds, images.
But Route 80 is featureless,
dark and nothing more.
I wish for some apparition,
a fire in the sky, the carcass
of an animal strewn across the road,
its blood flashing in snapshots.
Tonight words reached behind my eyes
like sea water, into my throat like desert air.
This night should be remembered.

My mother, with me big in her belly,
drove some other featureless highway,
the rest of the world home in bed.
A voice said, "Pull over."
And she did. Even though she was alone,
she listened to that voice,
and watched from the shoulder.
A darkened car hurtled toward her and me.
Tonight I say, speak to me, Voice,
so I will remember.

But I am closer to home with every mile,
knowing this drive will be forgotten,
not even hearing the radio drone.
Words burn in my mind.
There is no room for road,
or darkness, or music.
A voice I recognize now, as my own,
has whispered, Mother, blood, belly.
Carcass, car, desert.
These words anchor themselves just
long enough for me to write them here. 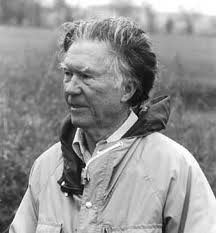 
By glow of the tail-light I stumbled back of the car
and stood by the heap, a doe, a recent killing;
she had stiffened already, almost cold.
I dragged her off; she was large in the belly.


My fingers touching her side brought me the reason—
her side was warm; her fawn lay there waiting,
alive, still, never to be born.
The rest of the poem can be read at The Poetry Foundation.
Posted by Author Amok at 7:11 PM

Labels: 30 habits of highly effective poets, betsy franco, early bard, national poetry month, the darkness around us is deep, traveling through the dark, william stafford, writing in the morning