Has this ever happened to you? You're given (or give yourself) a writing prompt. You sit with it. Nothing clicks. You get frustrated. Still, nothing. You fume at the prompt. Finally, you find a way to alter or massage the writing assignment so that you can write about what was on your mind the whole time.

That is the story of Poetry Postcard 16. It was January 12. I asked my husband to pick (eyes closed) the next postcard for a poem. And he picked:

I tried some of my usual "ways in." First, I researched the Sunken Garden in Missouri. It was part of the World's Fair. You know, the one in the Judy Garland movie.

(I could have written about the World's Fair. After all, my parents met at the '64 World's Fair in New York.)

Forest Park is still there (check out the website Forest Park Forever), but I couldn't find any modern reference to the Sunken Garden online. Sigh.

My next attempt at a hook for writing was the card's visual elements. But I couldn't find anything exciting to write about.

Still, this was January 12, which was nearly a significant date in our family's history. I found a way to write about that, and connect it -- circumspectly -- to the image on the postcard.

What I ended up with is a sort of meta-cognitive poem, one that owns up to the fact that this whole project is a literary conceit.

I asked my husband to pick a card
any card for January 12, which was --
in the year 2000 -- our daughter's
due date, though we did  not know
yet that she was she.
He closed his eyes and pulled
"Sunken Garden, Forest Park,
St. Louis, Mo." a noble promenade
past flower beds, every strolling
visitor in suit and hat, fit to be seen
as I wished to be -- my hair cut
and styled, fingertips tulip red --
when this child arrived, just
four days late, who (randomly
it seemed) became our daughter.


Our daughter turned thirteen last week. Thanks to all of you who sent birthday wishes. She didn't love this poem. Her exact words were, "Are you saying I'm random?"

I stammered through an explanation of how, during pregnancy, we don't know who our child will be. There's only a suggestion of personality in the growing baby's movements. Then, when the child is born, she could be no one else.

My husband's birthday is next week. Then my son, the dog, and me -- all in quick succession. Throw in a long list of friends and relatives born in Jan/Feb and you have Shovan Birthday Season. You know what would make this year's birthday even more magical? A Super Bowl win. 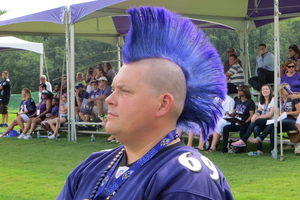 I could be this guy,

I had to come back to see yesterday's poem too. Actually, it's amazing how the brain makes connections. Even when stumped, you created a poem for this card, a story that will now be linked. Love that your 13 year old clicked on the word 'random'-her world!

Hi, Linda. Thanks for checking this one out. You're right about that word "random" -- the teen usage is a little off-kilter. She read the word as a mild insult!