It seems that every time the prose poetry form is mentioned, it comes under attack. Isn’t a prose poem the same thing as flash fiction?

Good question. It’s one of those gray areas of the literary world. I read “The Prose Poem as a Modernist Genre” by Margueritte Murphy. It appeared in The Writer’s Chronicle.

My take on the article was that the prose poem is about tone. Whether the poem’s focus is on setting, sensory images, or character, it’s all about the mood created.

I have written a handful of prose poems. I tend to use the form for persona poems, written in the voice of an invented character. Is the choice about tone? Possibly. The speakers in my prose poems are invariably younger (under 25) and thinking through a philosophical change triggered by a minor event. (Am I that predictable?)

Not all prose poems work this way. One of my favorites, which combines narrative and character beautifully, is “A Story about the Body,” by Robert Hass.

It begins, "The young composer, working that summer at an artist's colony, had watched her for a week.  She was Japanese, a painter, almost sixty, and  he thought he was in love with her." (Read the rest of the poem here. Recommended for HS and up only.)

Hass gives us two characters, a setting, and a problem -- all elements of story. So what makes this a poem? I don't have a simple answer.

Poetry Postcard 32 was one of my original antique store purchases. (Correction: The card was a donation from poet Patricia VanAmburg, who saved it from a memorable flight with an authoritarian steward.)

When I was a child, we made an annual trip to England, where I have family. Visiting the pilots in the cockpit was always a highlight of the long flight.

But this is our post 9-11 world and pilots are off-limits  to passengers. The image of an empty cockpit intrigued me.

I been thinking about this Lufthansa postcard for a long time, its empty cockpit full of lights and instrumentation, ‘cause it could be some kind of metaphor for life–God is my co-pilot and all–except the blank windows are wacked, like God’s flying me through heavy fog and even He with a capital H has to turn on autopilot and let the dang computers land this baby, which is fine if you believe God made the rules and stepped aside−now kids, play nice and no biting−if you believe that then He with a capital H can’t change the plane’s increasing velocity, the weather, or even snap his big-ass fingers and halt gravity, but if you don’t believe it, this ends up being a crap metaphor and this flight ends up screwed ‘cause I just got a look at the cockpit and there’s nobody home. 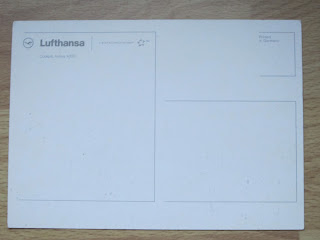 What is your take on the prose poem/flash fiction debate?

If you’d like to study up on the issue, check out these links:

To be honest, I do find prose poems confusing as a genre. I like the one you shared today a lot, though.

Thanks, Tabatha. It's a fascinating form. Interesting -- I couldn't find any children's or YA anthologies of prose poems. I think they are perfect for poetic monologues.

One of the assistants led a group of middle schoolers in a flash fiction group, working first with quick writes and then bringing them to find their own topic. We talked about it briefly, because she expressed an interest in prose poems. I occasionally see one in YA anthologies, but mostly I've read only one prose poetry book by Robert Bly "What Have I Ever Lost By Dying". Obviously I have little wide background, but I thought a prose poem perhaps was tone, very narrow in topic, a relating of an event, perhaps without an ending even. Laura, you're educating me! (I like the cockpit poem, the line where God has to turn on autopilot-& that's another conversation) Thanks!