My friend Lisa’s elementary schooler is flying through R.L. Stine’s "Goosebumps" series. She took her son to the National Book Festival last month, where he happily waited in line (and waited, and waited) to meet Stine.
Goosebumps didn’t exist when I grew up. Many of us fortyish and older cut our horror teeth on Edgar Allan Poe.

Poe’s been in the local news lately here in Baltimore. Apparently, Philadelphia isn’t satisfied with being World Series Champs, inventing cheese steaks and having a brand of cream cheese. They’re also claiming they have Poe's body. A scholarly battle is brewing. Look out Philadelpha. They don't call Baltimore Mob Town for nothing.
Read about Baltimore vs. those Philly body snatchers in a Poe smack down. Article at the Baltimore Examiner.
One of my favorite poems by Edgar Allan Poe is one I discovered as an adult. Spooky and sad.
Alone
From childhood's hour I have not been
As others were — I have not seen
As others saw — I could not bring
My passions from a common spring —
From the same source I have not taken
My sorrow — I could not awaken
My heart to joy at the same tone —
And all I lov'd — I lov'd alone —
Then — in my childhood — in the dawn
Of a most stormy life — was drawn
From ev'ry depth of good and ill
The mystery which binds me still —
From the torrent, or the fountain —
From the red cliff of the mountain —
From the sun that 'round me roll'd
In its autumn tint of gold —
From the lightning in the sky
As it pass'd me flying by —
From the thunder, and the storm —
And the cloud that took the form
(When the rest of Heaven was blue)
Of a demon in my view —
E. A. Poe

There’s a great version of “Alone” on the CD “The Days Gone By: Songs of the American Poets.” The CD is produced by Music for Little People.
Visit the Edgar Allan Poe Society of Baltimore for history on this poem. http://www.eapoe.org/works/poems/alonea.htm 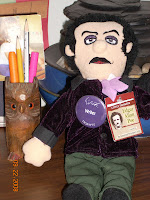 Poe is getting his own stamp this year. Look for your gloomy postage $.42 on January 16 – Edgar Allan Poe’s 200th (and my daughter's 9th) birthday.
(Like Mr. Poe? I got him at the Unemployed Philosopher's Guild.)
Find more poems to scare yourself silly at Poetry For Children -- Sylvia is hosting the Poetry Friday Round Up. Happy Halloween!
Posted by Author Amok at 6:29 AM

Thanks for this melancholy and thought-provoking poem. I'm definitely going to look up the CD you mentioned as well!

Laura,
Thanks for this new insight into Edgar Allan Poe! His poem, "Annabel Lee," plays a large part in my middle grade novel, Road to Tater Hill (Delacorte Press, to be released in September 2009).

The CD is wonderful. It has a fabulous rendition of Emily Dickinson's "Hope is the thing with feathers."

I wrote a report on Poe's life in middle school and have had him with me ever since. He's fascinating.

Cool! Thanks for the additional info too-- especially on the CD-- a format I love. And thanks for participating in Poetry Friday at PoetryforChildren this Halloween! Stop by any time...
Sylvia

Wow. It aches to read that. Thanks for sharing it!