Remember my abandoned sonnet (Poetry Postcard 22)? Like a gun flashed on page one of a mystery novel, it had to show up again before the end of the 44 Postcard Project.

It was Groundhog Day, February 2. Baltimore poet Rosalind Heid had just sent me the perfect postcard for the occasion. 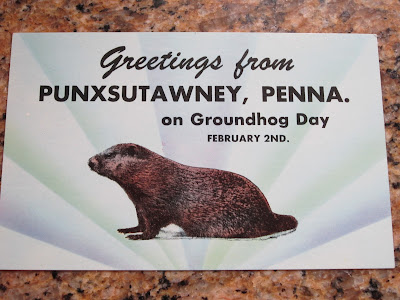 But occasional poems? Ugh. Aren’t they the job of poets laureate in countries like Great Britain, where they are required to write poems about coronations and royal births?

I had to put my snark and occasional snobbery aside and give the groundhog some thought. How does he feel about Groundhog Day? What does he think of all the fuss? Does he even like his personified name, Phil?

I began thinking about other animals that the media hypes because of their purported ability to prognosticate things like the weather, sports scores, and political elections.

This time I was able to complete the sonnet. The poem has a rhyme scheme, but it is not Shakespearean, Spenserian, or Italian. It’s not written in strict iambic pentameter, but there are about ten beats per line. You'll find an explanation of the three standard sonnet forms here.

Today, some say, a poem only needs fourteen lines to be considered a sonnet. See the last paragraph of Poets.org's sonnet article for more on the modern sonnet form.

Phil squats on the doormat of his burrow
and people gather, peering at his shadow.
It is a burden, forecasting the weather.
No one understands that problem better
than Paul, who foretold sports scores and elections
from his aquatic tank. His predilection
for mussels painted with the would-be winner’s
flag or face, for Paul, was merely dinner.
Even the names−Phil, Paul, Oscar the cat
who pads a nursing home, feet halting at
the beds of patients just before they die−
are humanized, as if Phil could say why
his shadow followed him outside today
and why these humans will not go away.

Call it serendipity, but after I posted this poem on Facebook, I heard from Linda Baie of Teacher Dance. Her son-in-law was editor on a documentary about Paul the Octopus. Here is a trailer for "The Life and Times of Paul the Psychic Octopus" from YouTube.

Cat lovers, here is an article about Oscar the cat.

"Punxsutawney, Pa. a community of 10,000, where, every February 2 the Groundhog appears and forecasts the weather for the succeeding six weeks. A shadow means six more weeks of winter. No sunshine, and hence no shadow, means spring is just around the corner."

On 2/2/13, Punxsutawney Phil predicted an early spring. East-coasters who experienced last week's record blizzard may disagree.
Posted by Author Amok at 9:04 AM

First of all, I would like to know why George Washington is wearing lipstick!
Secondly,I would like to announce that I am a Paul fan. I think he is beautiful and I like to think that there is something
out there more intelligent than us humans.

I guess George figured he was already wearing the wig, why not lipstick too?

We will have to watch the Paul the Octopus documentary together some time.

Sorry I missed the mention of Paul yesterday Laura. It was quite the craziest day. I've only seen bits of this movie, but have been told it is quite a favorite in Europe. Thanks for the mention & also for all the sonnet info; I didn't know that expectations were changing... I wonder what it would be like to live in Punxsutawney, Pa? Would some people tire of it? Is it like living with the community of Nessie, the loch ness monster? Interesting thoughts about animals, Laura.