It's time for a happy dance, because we are halfway through the 44 Postcard poetry project.

Yesterday, author Charles Rammelkamp visited to talk about the postcard tradition he shares with his twin brother.

Today, I've got postcard and poem #22. If you've been following the project, you know that I hit a creative wall with the last five or six poems.

A lot of the most recent poems were light verse. Some were clever. Some were ridiculous. I wasn't totally satisfied with them, but I  had gotten them done and moved ahead.

That ended with postcard #22. It is a painting, "Memories of the Bitter Past," by Betty LaDuke.

UPDATE: Betty LaDuke was kind enough to give me permission to post her painting!

The card came to me as part of the 30 Contemporary Women Artists book published by Pomegranate. 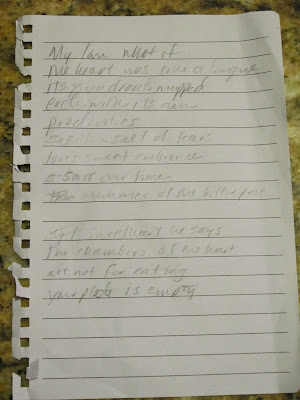 I had an idea, triggered by the word "bitter." What if the heart functioned like a tongue, with different tastes or sections devoted to the emotional flavors: sweet, sour, salty (tears), bitter? The poem was coming as a direct address:

My love, what if
the heart was like a tongue
its quadrants mapped
each with its own
proclivities...

This (white paper) is from my bedside notebook. 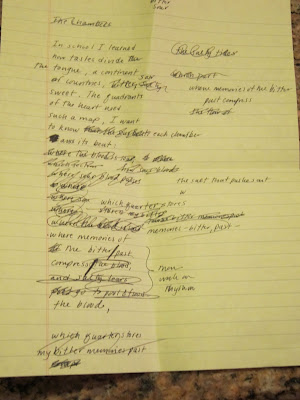 I came downstairs, grabbed a yellow pad, got a little rhyme action going.

In school I learned
how tastes divide
the tongue, a continent
of countries, sour
sweet. The quadrants
of the heart need
such a map, I want
to know each chamber
and its beat.

It's obvious from all the crossing out that I could not sustain this line of thinking/rhyme/rhythm. I tried doing some research about the structure of the heart.

And, as you can see from the second "stanza" (actually a reboot), I suddenly realized that what I had on my hands was a wannabe sonnet.

In school, I learned how tastes divide the tongue,
a continent of flavors, sour and sweet.
The content of the heart need such a map.
I want to know each chamber and its beat.

Hooray! I know where the poem is heading. Now, I can get to work.

Attempt 3:
Or not. I will spare you the: complaining to my husband, tearing out of hair, stomping around the kitchen, eating crunchy things very loudly.

I decided to start over. I opened The Essential Rumi and read a few poems. I began again.

Every Flavor
After Rumi

A bitterness for what is past
travels through two chambers of the heart
and then your lungs.

You unlock the door, expecting the heart
to shrink like a mealy apple
when it learns who is visiting.

Dishes for every taste are served at this inn,
every flavor: salty, sweet, sour and bitter.
Your ventricle welcomes each guest,

sweeps him back out again,
saying, “Come again, come again” or
“That one won’t be back.”

If it were always embers
or always a roaring fire,
the memory-guests would stay

they would talk all night,
drinking and eating delicacies,
you would be consumed.

This is the second time I've written a poem mimicking Rumi's style. The first is "The Parable of the Piano Bench," which will appear in this spring's edition of Seminary Ridge Review.

I hesitate to call this a breakthrough poem, but I do feel as thought I worked past that creative block. Magical realism sometimes appears in my poems. I'm still learning how to listen -- how to entertain and develop a wild idea when one walks through the wall.
Posted by Author Amok at 8:00 AM

I think you just taught me something about revision, Laura. I actually liked the beginning of that sonnet, but see that you moved into another kind of thought, letting the heart guide in more than metaphor. Love the atrium line, "hearth blazing and crumbling, blazing and crumbling". Like life?

Thanks, Linda. I've been thinking about the same thing. The sonnet form became limiting, closing off possibilities rather than making them happen. I read somewhere in my research that atrium means "hearth" and ventricle means "belly." The belly only made it into the poem tangentially.

It was so interesting to see how your poem developed.I thought the end result was amazing.