One of the most important things I have learned from the Poetry Postcard Project is that I love research.
The postcards have taken me to new places (City of Rocks, New Mexico; Fort McClellan, Alabama) and introduced me to fascinating lives (Vera Ellen, Debra Paget, Sarah Bernhardt).

Postcard 36 came from the book, Women Who Dared. I’d heard of blues great Bessie Smith (on the cover), but didn’t know anything about her.

I’ve only written one intentionally blues-influenced poem. It is a tribute to Etta James, who died last year. You can read the found poem, taken from a Women In Jazz interview with James, at the SPARK website. Several artists used the poem, “Feel What I'm Singing,” as an inspiration piece. Check out the cool art!

I thought I might write about Janis Joplin’s obsession with Smith, which led Joplin to buy a gravestone for the singer. But I abandoned that idea. I wanted the poem to focus on Smith.

Instead, I ended up using lyrics from several of Smith’s songs to structure a new poem, inspired by the hat she holds in the photograph. (Another feathered hat appeared in postcard poem 33.) 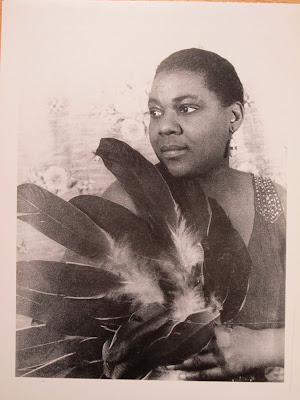 The Day You Quit Me

I’ll put on a red dress,
I’ll put on my hat,
I’ll sing like a robin
if you’ll just stay
where you’re at.

I got this hat made of feathers
bluer than the empty sky.
The day you quit me, honey,
is the day I’m gonna die.

The person who received this postcard suggested setting the poem to music. What do you think?

Here's another intersection between postcards and music, sent to me by poet Allan Roy Andrews:

Violinist Hilary Hahn's online "Postcards From the Road."
Hahn started the project fifteen years ago as a way to communicate with a group of third graders. Her project includes photographs from her travels accompanied by postcard-length reports and musings.

WOMEN WHO DARED
Bessie Smith (American, 1894-1937) made her first recording in 1923 (“Downhearted Blues”), and it quickly established her as the most successful black recording artist of her day. Her personal and musical power as a blues and jazz singer pushed out the boundaries of both female and African-American expression for a new mass audience.

My students studied jazz, including Bessie Smith, when I took them to NYC. They actually began to love that soulful sound, especially the young teenaged girls! She is pretty wonderful! I wonder if you put this to music if you need to add a few more verses, with that middle one the refrain? Just a thought! I like that the feathers have a purpose-escape?

My Art Thursday post tomorrow centers on feathers. I will add a link to your poem :-)

Hi Laura,
Did you get my comment for this post? I sent it yesterday in the morning.
Janet F.

Hi, Janet. Your post did not come through. I'm not sure why -- I checked the spam and it's not there either. Feel free to resend!

Tabatha, thanks! Sorry for being so behind on replies.