Poetry Postcard 37: Through a glass, darkly


The cryptic messages scratched into this window pane date to 1842 or ’43. That is the year Dark Romantic author Nathaniel Hawthorne married Sophia Peabody.

They spent the first year of their marriage living at the Old Manse in Concord, Massachusetts.

I was introduced to Hawthorne’s work, and the creepily romantic window messages, in a graduate school American Lit class. They were “written” with the diamond in Sophia’s wedding ring.

One of the lines is said to be related to a miscarriage. "Man's accidents are God's purposes" appears at the top of the window, above.

When Rob and I visited the Old Manse we were newly married, ourselves. I went looking for the window.

It's twenty-years later and here is my old friend Hawthorne on Postcard 37.

I knew right away, I’d be writing about that window. What I ended up with is a sort of found poem.

Each of the italicized lines comes from the Hawthornes’ window etchings. I used Nathaniel and Sophia’s writing as a jumping off point for each stanza.

Man’s accidents are
his top hat, upside down --
a bowl of thoughts
for anyone to pluck,
pithy fruit.

God’s purposes
the globe of Hawthorne’s
forehead and all the worlds
therein. His down turned
mustache.

This is his study
each word measured,
a gram of salt weighed,
a chunk of coal (this was
his early employment),
weighty, dark.

The smallest twig
is wet from rain.
His felted coat and velvet
collar. It must be winter.

Clear against the sky
one expects to be greeted
at his door with a swarm
of mechanical butterflies,
themselves escaped
from his overturned hat.

Composed by my wife,
inscribed by my husband,
they wrote with the edge
of her diamond. To etch this
must have cost them something
window glass falling,
fine as grains of salt
in the Gold light.

The mechanical butterflies are an allusion to Hawthorne’s short story, “The Artist of the Beautiful.”

If your only experience with this great American author is The Scarlet Letter, run – do not walk! – to the library and get a collection of his short stories. Hawthorne was an early master of short science fiction and fantasy writing, a precursor to such greats as Ray Bradbury.

Great Authors
Nathaniel Hawthorne (American, 1804-1864). While crafting tales that established the American short story as an art form and creating such classic novels as The Scarlet Letter and The House of Seven Gables, Hawthorne also worked as a salt and coal measurer in Boston, as port surveyor in Salem and for four years as U.S. consul in Liverpool, England.

P.S. I believe this poem concludes my hat obsession. See postcard poems 33 and 36. It helps to have a fine new chapeau. 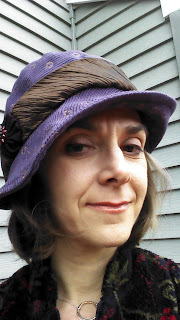 Don't ever stop this magnificent obsession with postcards. I'm loving it.

Well done, Laura! Beautiful compilation of their words and images that recall Hawthorne's stories. I completely agree with you on the stories. (Scarlet Letter, though--gack! Hester Prynne is a great character, but I think NH should have made it a short story, not a novel.) Now I want to see that window!
Pat

Thanks, dear Anonymous reader. After the 44 postcards, I hope to continue writing and sending at least one postcard poem a week.

Pat, hi! Thanks for stopping by. I enjoyed figuring out a process that worked for this poem. I remember being far more interested in Hawthorne's short fiction than the novels, though House of the Seven Gables was my favorite of those I read.