I know for some people ALA is  all about free ARCs... 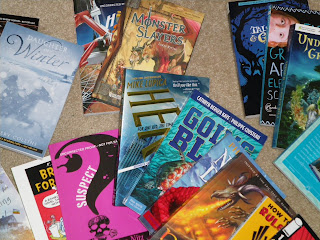 but one conference perk nobody talks about -- great eavesdropping!

I picked up a book published by Annick Press because I overheard one of the editors raving about it.

Annick has a five-book series called "Single Voice." It's a cool concept. Each book has two YA short stories (printed in super-huge font). The stories are back-to-back, so when you're done reading one, you flip the book over for the second story. The series seems like a good fit for reluctant teen readers. 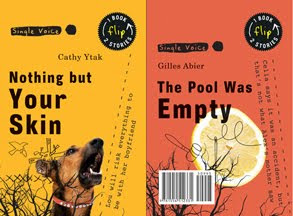 I read "Nothing but Your Skin" by Cathy Ytak, with a B-side, "The Pool Was Empty," by Gilles Abier. Both stories are YA for sex, language and themes. Both were translated from French.

What was your overall impression of the book?

The two stories were quick reads (less than an hour each). Don't look for the depth of a novel here. They are definitely short stories where a teen tells the reader about one life-changing event.

The story in one sentence?


Who were your favorite characters and why?

Lou, the narrator of "Nothing but Your Skin" is the most fully drawn character in both stories. I liked that she was an unreliable narrator, because of her disability (she doesn't share her specific diagnosis). Lou's understanding of her parents' limited and limiting view of her is heartbreaking.

What were your favorite parts of the story?

Both stories open with big drama ("Skin" -- the lovers getting caught, "Pool" -- the court room), then retrace how the teens ended up in trouble. That tactic worked well for both pieces. I also loved the setting of "Skin," especially the characters' sexual encounter on a frozen lake's surface -- beautiful.

The whole flip concept is appealing. Teens will feel they are getting two for the price of one. What they're actually getting is two strong short stories, padded by large font and clever marketing.

Would you recommend to a friend? What would you say?

This one is for upper high school. I have a young friend going into 9th grade. She'd love both stories, but I wouldn't want to be the one handing this book to her -- too racy, with f-bombs. Still, "Nothing but Your Skin" in particular offers a lot to think about. I'd like to see that one expanded into a novel.

SCORE
"Nothing but Your Skin" Three Scoops (expanded to novel length, it could be a Sundae), "The Pool Was Empty" One Scoop (with sprinkles).

Overall: Two and a half scoops.

Review Cheat Sheet
Empty Cone – Didn’t like it.
One Scoop – It was okay.
Two Scoops – Pretty good.
Three Scoops – Great book.
Sundae – I want to read the whole series. Now.
Posted by Author Amok at 10:30 AM

So happy you enjoyed Nothing But Your Skin/The Pool Was Empty! There are more books on the way, and we're very excited about the series. You can read excerpts from all the books and check out the trailer here: http://www.annickpress.com/singlevoice/

Glad ALA was a success for you. What an enticing stack of ARCs!

Great to hear from you. Are there any plans to develop "Nothing But Your Skin" into a novel? Please say yes!

Oh no, sorry to disappoint! The short answer is no. The longer answer is that the first few books in the series, including "Nothing But Your Skin", were originally published in French by a publisher called Actes Sud. They were also published as single volumes, whereas we've paired two stories in each flip book.

We do have more books in the series coming out this fall, though!

I'm glad to hear there are more coming out. I'll definitely check those out. Do you have any personal favorites?

From the most recently published batch, I have two titles tied for personal favorite: Nothing But Your Skin and The Pool Was Empty. I love stories that deal with the ups and downs of relationships, especially first love.

I haven't read the final versions of the next batch yet (they'll be out this fall), but I'm eager to read Train Wreck, which sounds very provocative. It will be paired with another story called Too Late.

Thanks. I'll look for that one.

Just curious for my short fiction writing friends, are you taking submissions of YA short stories for the series?