It has taken me a few weeks to recover from process my trip to Italy last month. One month ago today, my two travelling companions and I were arriving in Salerno. We quickly settled into our B and B and set off through the narrow, cobbled streets of the city, to find the other poets.

Ann, Debby, and I had come to Salerno for the first 100 Thousand Poets for Change World Conference. I've blogged about 100 TPC before, but this was my first time meeting other organizers. There were 80 of us from 21 countries!

When people ask about the trip, I can honestly say that the food was AMAZING, especially in Salerno. Since we were in old city Salerno, which is a port town just south of Amalfi, you can imagine that the sights were incredible. But the most important thing that I carried home with me is the friendships we made with other poets.

For the next few weeks, I am going to feature poets who live and work outside the U.S. or are immigrants to this country. Many of these poets are people I met in Salerno, but a few will be local authors who were born in other countries.

To kick off my World Poetry series, I'd like to welcome poet and journalist Menka Shivdasani, of Mumbai, India. At our first formal poetry reading in Salerno, Menka read an amazing feminist piece, "Hinge."


The two of us also had time during the conference to chat about our work in the schools and writing poetry with children. That's what we're going to focus on today.

The 100 Thousand Poets for Change festival in Mumbai, which takes place over four days at the Kitab Khana bookstore, includes one programme for children every year, which is put together by Mrs. Rati Dady Wadia, former principal of Queen Mary School, and a teacher with more than 50 years' experience. She works with children across Mumbai schools to conduct poetry competitions based on themes of peace and sustainability, in tune with the themes of 100TPC.

The children then present their poems publicly as part of the programme, in a session that includes music and theatre performances as well. Organisations such as The Writers' Bug have also expressed an interest in participating and some of their children had also shared their poems in 2014. [Check out The Writers' Bug website -- it's adorable!]

Last year, we asked children to write about India as well as about other countries for a session titled 'We are the World'. The titles are chosen in a way that children can relate to immediately, and they did, in fact, sing the popular song as well during the session.

While putting together this concept, I wanted children to start thinking about themselves as people who were proud to be Indian, but who also considered themselves as citizens of the world. The idea -- tenuous though it might seem to some -- was that if children started thinking of themselves as world citizens, they would be more amenable to the idea of peace between countries.

The first step towards this, in my view, was for them to become familiar with other countries and cultures. The children were free to write about whichever country they wished to, and many of them did some research before writing the poems, adding to their knowledge of other global regions. Some children even came to the presentation wearing costumes that represented the countries they were writing about.

When Mrs Wadia introduced the subject, this is what she said:
"India, the land of many religions and cultures – the land that nurtures so many diverse points of view and welcomes people from all walks of life; we are proud to be Indian but also believe that we are one with the world. Ours is a land that has been known for its tolerance over the centuries, and it is that makes India so special. We must all contribute towards keeping this ethos alive and not allow ulterior motives and political gain to overpower this amazing trait.

In a world that is increasingly getting divisive, we can learn to build bridges and break down walls."

She then brought in the concept of peace between countries, and of how it was important, even as we took pride in being Indian, to ensure that we lived in harmony with the rest of the world.

In the previous year, we had asked the children to write about nature and the environment, and these poems are represented in the book as well. The skit by Katie Bagli, 'The Earth Summit', which was performed by the children last year, brought in this theme too.

Thank you, Menka, and Mrs. Wadia, for telling us about your poetry celebration. I'm pleased to be able to share a student poem from the book THE MUSIC OF THE SPHERES. Prachi Jain's poem "Rome" had special appeal for me because last month was my first visit to Italy. The poem made me think about the way certain places, especially historic ones, exist as a landscape in our minds -- even if we have not visited them.

What have you achieved if you have wandered earth's band
But never attempted to venture Rome's heavenly land?
The city with vast treasures of history
Which on Earth, indeed remains a mystery.

Nursed by a wolf -- two abandoned twins
Who great and fought to see who wins
Romulous stood over Remus, with pride and valour
And ruled over the land, showing off his glamour.

The picturesque city of Venice,
Where fires are breathed into every furnace
Where water flows from how to home
And gondolas row to every dome.

The Colosseum of Rome, known for its gladiator fights
Which today, is known as the land of lights.
It has an enormous underground circular base
The ruins of which still adorn the place.

So that's all I have got to say about Rome.
After all, I can only dream of it from home.
All I can do is persuade you to visit this scenic land
And while going, take me along, hand in hand.

Thanks for visiting, Poetry Friday friends. If you have any questions or feedback for Menka, please leave them in the comments.

Enjoy this photo gallery from Rome. I hope Prachi has a chance to visit this city of wonders some day. 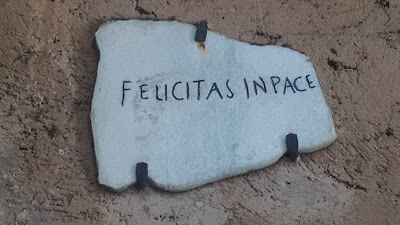 Great blog post! Amazing work Menka. So glad you made this connection! For rhe children!

Beautiful photos, and a great post. Menka your project sounds amazing. I love to hear about children being encouraged to write and share poetry and the idea of using poetry to encourage peace and a sense of world unity is wonderful!

I hardly know where to start! Menka's dedication is admirable. Prachi's poem is charming. And your photos are gorgeous!

I love how poetry, like music, is universal and brings together all of us around the world. Thanks for sharing Menka's project and your pictures from Rome. My anniversary trip to Italy 8 years ago was one I'll always remember.

It's going to be lovely meeting your new poet friends, Laura, & today wonderful to hear from Menka and that special program for children and writing poetry in Mumbai. I enjoyed Prachi's poem, especially that ending, to ask to go 'hand-in-hand". Thank you!

Thank you for this new series -- thank you for taking us along with you to Italy and to this conference, and for introducing us to some of the 100TPC from around the world!

I have doorknob lust!

I took a look at the Writer's Bug website and think it is extremely appealing. I especially liked the photo galleries where the joy in kids' and adults' faces is unmistakable.

What a dedicated team to pull off an event of that size with such noble goals. Thanks for taking us along with you, hand in hand!

Beautiful start! I'm looking forward to more! What an amazing opportunity your trip was!

So glad to see you doing this series, Laura. I'm looking forward to future posts.

So much poetry goodness in this post, and in Menka's project. Looking forward to reading more of these posts!

Poetry seems like a perfect vehicle to connect people from all over the globe. I loved reading about your trip and seeing the photos from Italy. And the work from India, well… It got me thinking about what if poets from Poetry Friday started something similar in their countries. Hmmm, watch out Denver, here I come!

Thanks for visiting, everyone. I hope to have Menka return with a poem of her own over the course of the summer.

Next Friday, look for a post about Polish poet (and longtime Maryland resident) Danuta Kosk-Kosicka.

What a wonderful poetry adventure! For you and for us.

The trip sounds like a heavenly one that combines travel, poetry, and photograph. I especially enjoyed your slant on global connections and hope that you will offer one of your poems for the next gallery that I will announce soon. I just posted Spring's Symphony Gallery at http://beyondliteracylink.blogspot.com/2015/07/springs-symphony-unveiled.html.

What an amazing event Menka describes! It's easy to understand how this conference was life-changing for you, Laura. I'm grateful you will be sharing some of your new friends and their work over the coming weeks.